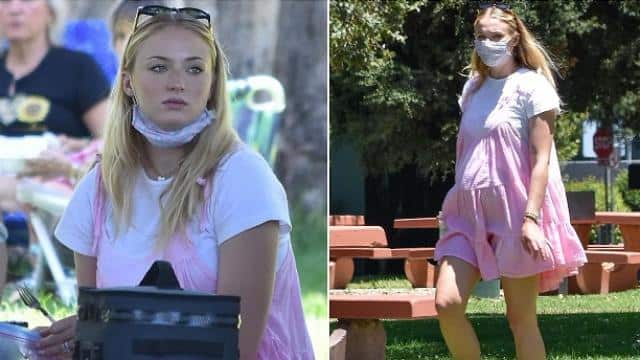 Priyanka Chopra’s Jethani and Game of Thrones actress Sophie Turner are enjoying their pregnancy period these days. Sophie is spotted outside the house several times with husband Joe Jonas. Please tell that Sophie is currently in Los Angeles with Jo and her mom-dad. By the way, Sophie also wears very stylish outfits in pregnancy.

Please tell that during lockdown Sophie and Joe are spending a lot of quality time with each other. Sophie told during an interview that she is very introverted and likes to stay at home. He also said that he does not understand what people find difficult in living at home.

Let us tell you that in 2016, Sophie and Joe started dating each other, after which both of them got married in Los Vagas in May last year. After this, the two married for the second time in France in the presence of their family and friends.

In a video for GQ magazine, Joe spoke to his fans, explaining why the two had married 2 times. Joe said that we got married first because we had to get married legally in the state.

He had said, “We thought it would be fun for all our friends, invite them (to Vegas) and get married without a plan.” Joe further stated that he and Turner had to face many things after this marriage, when their parents got the news about their decision.

He had further told, ‘My parents called me the next morning and asked’ Have you got married? ‘ And I realized that I told everyone, but forgot to tell my parents. So when you are getting married legally, tell your parents.