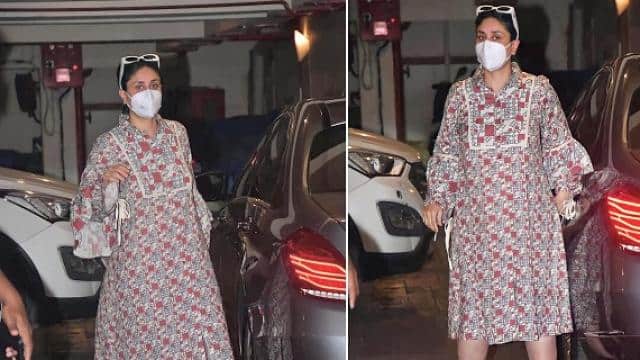 Kareena Kapoor Khan is enjoying a pregnancy period these days. Recently, Kareena was spotted with mother Babita. During this, Kareena wore a Kaftan type dress in which her baby bump is clearly visible. Taking care of safety, Kareena is also wearing a mask. Earlier, Kareena shared her photo with mother on Instagram, in which the actress’s mother was seen massaging her head.

Let us know that Kareena recently told how she was reacting when she told Saif Ali Khan about her second pregnancy. Kareena said that she did not get any film reaction from the family. Even Saif’s reaction was normal.

Kareena had said, ‘There is nothing filmy in my house. Saif is very normal and relaxed. Yes, he was very happy when he found out. As I said, it was not all planned but it was something that we really wanted to celebrate and we are enjoying it together.

Amrita Rao spoke openly to the upcoming guest, saying- Yes, I am nervous about the Motherhood period

Baby bump will not be seen in the film

Kareena has shot the film during her pregnancy, so the question in everyone’s mind was how would her baby bump hide in the film. But the makers have found a solution. According to reports, VFX will be used to hide the actress’ baby bump.

Maruti Suzuki sold more than 250 cars every hour in October