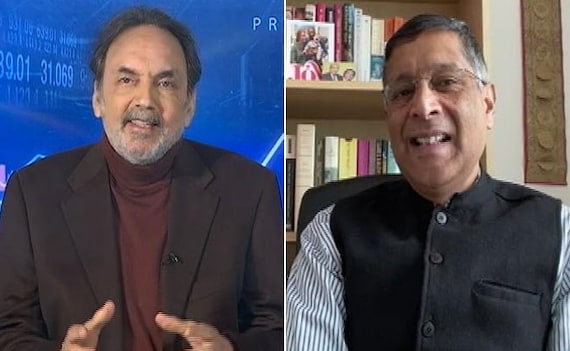 Here is the complete details of the conversation:

NDTV:With the important phase of the Indian economy, it has become the most important budget of decades for many reasons. Economic survey also, which gives an opportunity to assess the state of an economy. The virus has caused severe damage to the economy. The lives and livelihoods of the people have been deeply affected. In such a situation when and how will the economy bounce back. What policy decisions should be made in the budget?

Dr. Arvind Subramanian: It has always been a pleasure to discuss the Indian economy with you.

NDTV: This is a very important budget and economic survey?

Dr. Arvind Subramanian: This is the most important budget of the government after the full budget of the year 2015. The first is that the economy is deeply hurt and we have to overcome it. But this is also the time for the government to reorganize the road. This is a chance to revive the policy making stance.

NDTV: Your documents, studies clearly show how terrible the pandemic has caused to the economy. But there were problems before. We were talking about moving towards the epidemic, some things were not right, right?

Dr. Arvind Subramanian: The epidemic and the lockdown slowed economic activity. But there were already weaknesses in the economy. We talked about how the growth rate was already coming down. There was a considerable decline in exports. So our reaction to the Kovid’s weaknesses and epidemics before the economy had a mixed effect. The IMF has said that in the year 2020 of the epidemic, India will be among the most affected countries and will see a drop of about 8 percent in GDP.

Dr. Arvind Subramanian: My only concern is that all these figures are associated with instability. But it is certain that 2021 will be very good for India.

Dr. Arvind Subramanian: Whatever it is, but it is going to happen.

NDTV: But if Arvind is going to be a good year. Then it will be quite a normal budget.

Dr. Arvind Subramanian: The economy will bounce back for 2-3 reasons. The first is that with the improvement of Corona situation, economic activities will automatically intensify after all restrictions are over. Second, the global economy will also accelerate, trade will increase and India will also benefit. Financial conditions are good, interest rates are extremely low all over the world, business will grow and naturally, after a long sluggishness, it will show up. For all these reasons, 2021 will be relatively good. But there are two challenges, between 2019 and 1.5 to 17 million people have lost their jobs. Second, the RBI has said that the implicated debt (NPA) can reach 13.5 per cent of the total debt from 7.5.

NDTV: However, your documents show that India has improved economic stability to some extent. Government debt was 75% in NDA 1, it was 60 in UPA 1 and 55 percent in UPA 2. This has reduced in the current BJP government. That means government debt has come down. However, this is slightly higher than the average of 52% in developing countries.

Dr. Arvind Subramanian: Sorry, we would like to make it clear to all that we are talking on the figures before the knocking of the epidemic. After the epidemic, the government debt figures will be very different. Getting that situation again will be challenging.

NDTV:You have shown that inflation is coming down. In UPA 1 it went up and in UPA 2 it went above 10 percent. This is around 5% in the BJP government. But this was before the epidemic.
It is in a good position when it comes to exports as against the current account balance i.e. total imports. It is one percent of GDP. Although slightly higher than the average for developing countries. So what will be the effect of these positive things?

Dr. Arvind Subramanian: India has seen economic instability and financial crisis before. Harish Damodaran had said that four things are food, fuel, foreign exchange and fiscal (fiscal deficit). Which make an impact. You have seen that food prices rose, oil prices went up and we did not have enough money reserves. And when we talk about the financial deficit after the epidemic, the situation is more in control than before. This government believes in macroeconomic stability. Inflation is low and foreign exchange reserves are around $ 600 billion. So we are in a period of less economic instability than before.

Dr. Arvind Subramanian: I consider it one of the most important achievements of the government. This is a holistic development. Governments have done tasks like education and health, social security such as MNREGA, PDS, Right to Education, Right to Food during UPA. But the approach of Modi government is different. The standard of living of the poor has improved and the government has benefited from it politically.

NDTV: But in bank accounts, toilets and LGP gas stove schemes you do not think there is a need to implement better

Dr. Arvind Subramanian: It is true that we are giving the accessibility data of these schemes, not their actual use. So there are drawbacks in implementation. But since the government strongly believes in these things, it will focus on implementing them in a better way.

NDTV: But talking about the health of children, during the UPA, anemia came down from 65 to 55 per cent, now it has increased rapidly. The stagnation rate of children has also stopped at 30 percent. The condition of diarrhea has reached the level of 14 years old.

Dr. Arvind Subramanian: It is believed that health and education also improve with increasing income and spending capacity, but does the country have the same economic opportunities that truly improve the education and health levels of poor children and women?

NDTV: India should become a country with export based economic development. India’s growth rate is the third highest in terms of exports. Vietnam 16%, China 15.5 and India 13.4%, while the global average is 6.9%. Has GDP benefited from this

Dr. Arvind Subramanian : When exports are good, the economy is good. We have also performed better in manufacturing exports along with the services sector. We have done better in high skill manufacturing, but have to pay attention to unscoiled manufacturing such as textiles, clothing, leather, footwear, toys

NDTV: What would you like to see in this budget?

Dr. Arvind Subramanian: First, if we are not yet recovering from the epidemic, then things like MNREGA, PDS, cash transfer should continue. Second, there are new shocking things in the budget, but I think the government will stay away from surprising things like increasing tariffs. I think the government can pull back some steps in the policy of excluding many people from the tax net. Its scope may increase back.

But most importantly, the budget should be transparent. Statistics must be reliable. Have a serious plan to control the financial deficit. Generally, there should be some collaborative approach in policy making, whether agriculture or GST.

NDTV: Do you think the budget deficit should be worried.

Dr. Arvind Subramanian:Right now government incentives are needed. The government will have to find many means to increase spending, such as a fast campaign of privatization. If the economy performs better next year, the debt itself will be reduced. To support the economy temporarily, more debt is needed.