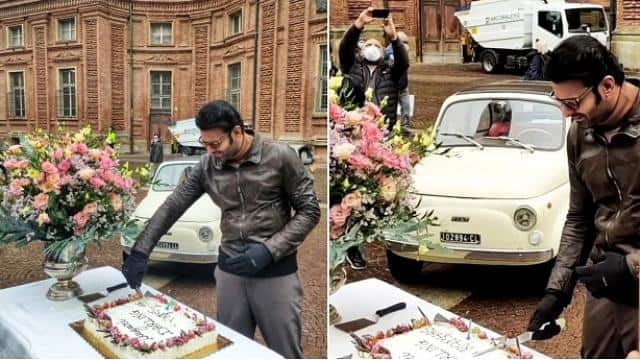 Superstar Prabhas celebrated his 41st birthday on the set of the upcoming film Radhey-Shyam. Radhey-Shyam’s team brought a big cake for Prabhas, which had written, Darling Prabhas. The entire team of the film congratulated him. Prabhas is wearing a black jacket during which he looks dashing. Let me tell you that Prabhas is shooting for Radhe-Shyam in Italy.

Earlier, the actor’s motion poster from the film was released on Prabhas’ birthday.

Apart from Prabhas and Pooja Hegde, the film will also feature stars like Bhagyashree, Priyadarshi, Murali Sharma and Kunal Roy Kapoor. It will be released in Hindi, Telugu, Tamil, Malayalam and Kannada languages. Directed by Radha Krishna Kumar and produced by Bhushan Kumar, Vamsi and Pramod, ‘Radhe-Shyam’ is a romantic period-drama