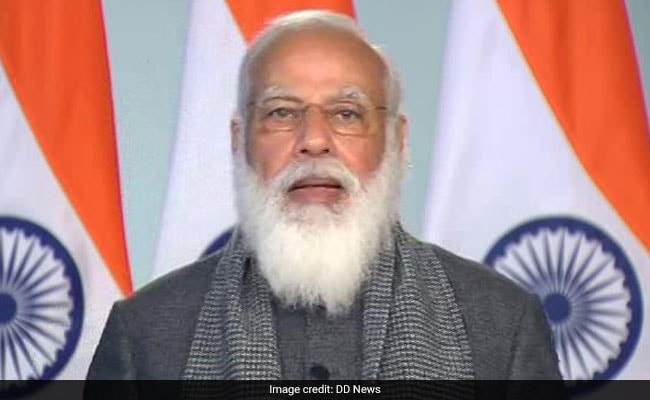 Prime Minister Narendra Modi (PM Modi) in Davos on Thursday World Economic Forum (World Economic Forum) conference was addressed through video conferencing. PM Modi Gave his views on the Fourth Industrial Revolution here. The PM said that India overcame this by turning the fight against Corona into a mass movement. In the campaign to recover from Corona, India’s self-sufficient campaign will become the foundation for the supply of global products and services.

Falsified all the horrors of Corona

The Prime Minister (Prime Minister Narendra Modi) said, today the biggest concern is how the world economies will grow, so everyone’s eyes are bound to stay on this forum. When Corona arrived, the difficulties were no less in front of India. From February to April, renowned experts had said that the most affected country in the whole world would be India. There will be a tsunami of corona infection in India. 7-8 crore Indians were reported to be corona and more than 20 lakh deaths were predicted. The concern of the world was natural for a developing country like India, what would have been our mood then. But India did not let disappointment dominate. India continued to actively pursue mass participation.

PM Modi said that India pushed forward the campaign with doctors and health workers with equipment, testing and technology related to Kovid. The country turned this fight into a mass movement. India is among those countries which succeeded in saving the lives of more and more of its corona patients. It would not be possible to measure the success of India with the success of any one country. India, with 18 percent global population, saved the whole world from major human tragedy. Then we used to get all the things including PPE kits, masks, ventilators from outside, but today we are exporting it to other countries.

The biggest vaccination program was done

India has started the world’s largest corona vaccination program. India has given vaccines to more than 23 lakh health workers in 12 days. In the next stages will start vaccination program for the elderly and people suffering from serious diseases. India has fulfilled its global responsibility from the beginning. Transported more than one lakh citizens to their country. Delivered medicines to more than 150 countries. Provided online training to health workers of many countries. Also told the importance of Ayurveda to the world. Today, India is also sending Kovid vaccine to neighboring countries.

Modi said, just two Made in India have come into the world. In the coming time, many more corona vaccines are coming from India. At this speed, the corona can be controlled. Conditions on the economic front will change rapidly. In Corona’s time too, India started infrastructure projects worth millions of crores. Started skill programs. Now India has moved ahead on the campaign of self-reliant India. This will help the global industrial revolution.

Future will depend on these four things

PM Modi said, in the coming times, there will be maximum emphasis on Connectivity, Automation, Artificial Intelligence / Machine Learning and Real Time Data. Connectivity in remote areas of India has also increased. India’s automation design pool is also large. The centers of the world’s engineering companies are also here. Indian giants have also dominated the world in AI and machine learning. 1.3 billion people in India have a unique ID Aadhar (Aadhar). Transaction of Rs. 4 lakh crores during Corona period UPI Has happened to Countries around the world are considering the UPI system. India helped in the Corona era by transferring 1.8 lakh crore rupees directly to the account of 16 crore people. Unique Health will start giving ID. Every success of India will help in the success of the whole world.

India will be the country with the fastest growth rate

Indeed, the International Monetary Fund (IMF) has estimated India’s economic growth rate (GDP) to be 11.5 percent in FY 2021-22. India can again get the title of the fastest growing economy. In fact, the growth rate was -23.5 per cent in the first quarter of the fiscal year 2020-21 and -7.5 per cent in the second quarter. GDP can remain -7.7 percent in the entire financial year.

Budget 2021: Railways may increase with the new announcement, the possibility of getting the highest allocation amount