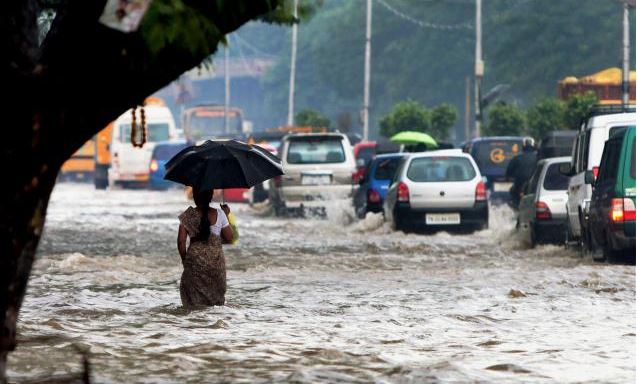 Prime Minister Modi, who paid a visited the flood-stricken Chennai, announced a release of Rs. 1000 Crore assistance to soothe the situation. Most parts of Chennai are submerged in torrential rains that have been noted as the heaviest downpour over the last 100 years. A deluge has been triggered as significant areas of Chennai, its suburbs, as well as Puducherry, remain affected by the heavy pour for the last couple of days. Several roads, neighbourhoods, airports, railways have been severely affected along with the loss of power supply and services of transport. Mobile networks have also been reported to be fluctuating.

The meteorological department predicts a continued rainfall until Friday but with reduced intensity.

On his visit to Chennai, Modi exclaimed, “This is over and above the Rs 940 crore which was released earlier” and also added, “The government of India stands by the people of Tamil Nadu.”. CM Jayalalitha and Governor K Rosaiah did have a talk over the matter with PM Narendra Modi.

The death toll has reached 200, and thousands of them stay marooned in the state capital, Chennai.

Rescue services have been provided by deploying the army. The two streams of the Army’s Garrison Infantry Battalion have been allotted for services in Oorapakkam and Tambaram soon after TN Government started seeking assistance. A power cut has been initiated as a measure of safety and people are advised to remain wherever they are. Water has been forcefully discharged from the Chembarambakkam reservoir (25 centimetres between 8.30 am and 5.30 pm on Tuesday) into the Adyar River at the rate of 20,000 cup. Ft per second. 100 boats and 29 teams are already functioning in Chennai with the aim of making public life convenient.

According to the municipal, as per the warning received from Chennai Collector, about 3000 people who lived on the banks of river Adyar have been relocated to places on a temporary basis keeping in mind their safety.

A MET bulletin also reveals that few of the places including Puducherry, Tiruvallur, Chennai and Kanchipuram will be affected the most. Reports say that three lakes in the district of Kanchipuram were breached because of severe rains.
Jayalalitha stated, “I have ordered officials to take precautionary measures before releasing surplus water from reservoirs and evacuate people living in low-lying areas,” and mentioned that the police, fire and rescue, state and national disaster forces and coast guard were kept informed to be ready for evacuations upon requirement.

The airport authorities, Chennai, have also shut down their services in the same regard until 6 am Thursday.

The public, under panic, has been reaching out to people by SOS messages were ways of access and exit are blocked as a result of flooding water. Inundated main roads and cross roads have paved the way for complete loss of transport within the city.

Anurag Gupta at the National Disaster Management Authority (NDMA) in New Delhi, said, “The biggest challenge is to find a way to make the inundated airport and main roads,”

Apple Macbook Air to be revamped with 15 inch screen size