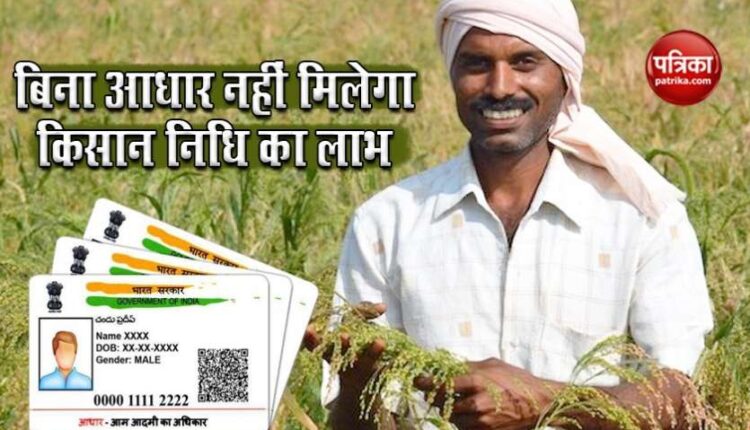 new Delhi. Prime Minister Kisan Samman Nidhi Scheme (PM Kisan Samman Nidh Scheme) is being run by the Central Government to increase the income of farmers and improve their condition. In this, 6 thousand rupees are sent annually to the account of farmers. This installment comes in three times. In which 2 thousand rupees are sent each time. The government is going to send the installment for the month of November soon, but the money will come in the account only if your bank account is linked to Aadhaar (Aadhaar linked to Bank Account). The last date for joining the account with Aadhaar is 31 March 2021. So, let’s get this done soon.

This process of Aadhaar linking is already going on in other states, but it was not yet mandatory in Jammu and Kashmir, Assam and Meghalaya. But now the government has also asked the farmers of these states to get Aadhaar linked to the bank account. So that they can get money on time. The government’s motive behind making Aadhaar mandatory is that the benefit of the scheme should be given to real farmers. Because many times there are complaints of fraud in the scheme, due to which the rightful owner does not get his right. But due to the Aadhaar link, the complete details of the farmer will be computerized. With this, the government will have complete details of the real entitlement.

Procedure for linking account with Aadhaar
The bank account that you have given in PM Kisan Scheme, you will have to go to the branch of that bank. Take a photo copy of the Aadhaar card and original documents with you there. Bank employees will verify these and feed your Aadhaar 12 digits into the computer. After doing this, a message will come on your registered mobile. This will link it. Net banking should be enabled to connect Aadhaar.

Know how many farmers benefited
According to the Ministry of Agriculture, so far, about 11.17 crore farmers have been given more than Rs 95 thousand crore in the country. 11,19,474 farmer families in Jammu and Kashmir have received the scheme money. Similarly, 1,74,105 farmers from Meghalaya and 31,16,920 farmers from Assam have benefitted from the PM Kisan Samman Nidhi Scheme.

Shahrukh asked the fan – will he announce his film in the next 50 years? ‘King Khan’ won hearts by answering