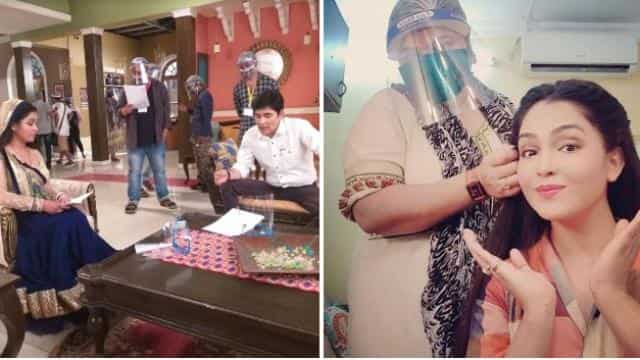 Shooting of ‘Bhabiji Ghar Par Hain’, TV’s favorite show has started. According to the news, all the stars are present on the set between lights, camera, action. The makers decide to shoot new episodes. In such a situation, our Angoori Bhabhi is very excited about shooting again. Shubhangi Atre says that it was a much longer break than expected, which allowed me to fulfill my hobby of dancing as well as to meditate regularly.

Shubhangi further says that I am excited to be back on the set and look forward to the new episode coming back soon. Earlier our set was full of people but now due to limited people, the modern colony is looking very different. We were screened as soon as we went to the set and then we started the day with Ganesh Aarti and we rehearsed wearing masks. Being near the set, I got ready straight away. In addition, we all took separate breaks instead of lunch breaks. This whole experience was quite different, but gradually we will get used to it.

At the same time, actor Asif Sheikh, who plays ‘Vibhuti Narayan’ in the show, said that it was nice to go on the set after such a long gap. I have been waiting for a long time to start shooting and now I am happy to be back on the set. Keeping in view the social distances, we all met and greeted each other from far and wide with Hello and Namaste. On reaching the set, our body temperature and oxygen levels were measured. We all wore masks that were only taken off in front of the camera. We all followed social distance, following safety and hygiene guidelines.

Let us know that all the actors, camera man and makeup artist wore face shield, mask and PPE kit. Also, social distancing is also being followed in its entire way.