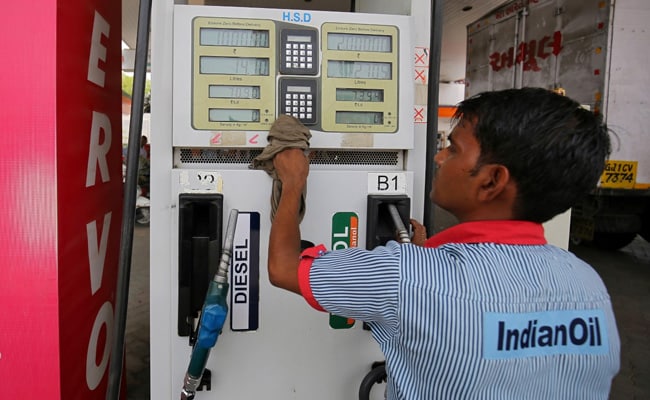 After the duty cut, the total tax on petrol in Delhi has come down to 50 percent. (symbolic picture)

After the reduction of excise duty by the central government, the total tax on petrol in Delhi has come down to 50 percent and on diesel to 40 percent. At the same time, the tax on vehicle fuel has been further reduced in those states which have deducted value added tax (VAT) or sales tax after deduction of excise duty. The retail prices of petrol and diesel are fixed after adding central excise duty, commission to dealers and VAT to the basic oil prices. The base oil price is based on the current international benchmark rate plus freight charges. As per the price structure of the fuel available from public sector petroleum companies, the central excise duty in Delhi on November 1, before the duty cut, was Rs 32.90 per liter and VAT 30 per cent, which works out to 54 per cent of the retail selling price of petrol. This has come down to 50 per cent in Delhi after a reduction of Rs 5 per liter in excise duty.

With the central government cutting excise duty, two dozen states and union territories have reduced VAT, which has further reduced the retail prices in percentage terms in these states. Delhi government has not reduced VAT yet. Similarly, in Delhi, diesel attracts central excise duty of Rs 31.80 per litre, VAT 16.75 per cent and air ambient duty of Rs 250 per kilolitre, taking the overall tax to 48 per cent. This has come down to 40 per cent in Delhi after a reduction of Rs 10 per liter in excise duty. If VAT is cut, the prices will come down further.

The highest VAT is applicable in Andhra Pradesh at Rs 21.19 per liter. After that, VAT of Rs 21.14 per liter is being levied in Rajasthan and Rs 20.21 per liter in Maharashtra. Himachal Pradesh charges the lowest VAT of Rs 4.40 per liter and Andaman and Nicobar Rs 4.58. Petrol pump dealers are given a commission of Rs 3.85 per liter on petrol and Rs 2.58 per liter on diesel. Significantly, the central government last week cut excise duty on petrol by Rs 5 per liter and on diesel by Rs 10 per liter to provide relief to consumers troubled by record-high fuel prices.

After the announcement of the central government, 24 states and union territories have given more relief to the people by cutting VAT rates in different proportions. Karnataka, Puducherry, Mizoram, Arunachal Pradesh, Manipur, Nagaland, Tripura, Assam, Sikkim, Bihar and Madhya Pradesh are the states which have given additional relief to the people by reducing the VAT rate. These include Goa, Gujarat, Dadra and Nagar Haveli, Daman and Diu, Chandigarh, Haryana, Himachal Pradesh, Jammu and Kashmir, Uttarakhand, Uttar Pradesh, Odisha, Meghalaya and Ladakh. The states which have not reduced VAT so far include Rajasthan, Punjab, Chhattisgarh, Maharashtra, Jharkhand and Tamil Nadu ruled by the Congress and its allies. These include AAP-ruled Delhi, Trinamool Congress-ruled West Bengal, Left-party-ruled Kerala, TRS-ruled Telangana and YSR Congress-ruled Andhra Pradesh. On Wednesday’s excise duty cut, the price of petrol across the country has come down by Rs 5.7 to Rs 6.35 per liter and diesel by Rs 11.16 to Rs 12.88.

Petrol, Diesel Price Today: Petrol came from 110 to 103 in Delhi due to reduction, check what is today’s rate in your city