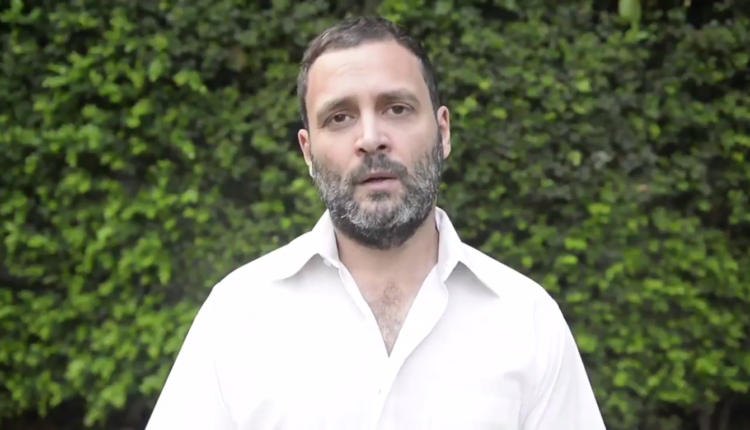 E-wallet companies, especially Paytm, have a seen a giant boost in their users sinceRs 500 and Rs 1,000 notes were banned by the PM on November 8.

“The idea behind a cashless economy is that a few people must get maximum benefits from these (cashless) transactions, this has damaged the nation,” the Congress vice president said at an opposition protest against the currency ban on the Parliament’s premises, ANI said.

“If they let me speak in the Lok Sabha I will expose this nexus. How PayTM is actually ‘Pay to Modi’ “, Rahul said, making it abundantly clear he was accusing the PM of having a nexus with some corporates.

The Congress leader said the PM is oblivious to the “suffering” people are facing due to the shortage of cash after high-value notes were scrapped.

“He is laughing, having a nice time while the people of the country are suffering,” said Rahul.

While the PM’s party and a section of people have hailed the high-value notes’ ban as “bold”, Rahul and other opposition leaders beg to differ.

“This is not a bold decision, it is a foolish decision which has been taken without any due consideration. It has devastated the poor, farmers and daily wage workers. We want to have a discussion (in Parliament). We want a vote (in Parliament). The government doesn’t,” the Congress vice president said.

Rahul also called out the PM on his purported reasons for the ban on high denomination notes. The PM has variously said the ban’s purpose is to end black money , make counterfeiting difficult to cut off sources of funding to terrorists and to make India a digital country with cashless transactions.

The Congress leader and other opposition leaders aren’t buying any of those lines of argument and also see the various reasons being touted for demonetisation as proof that the government has made an ill-thought out move with the currency ban, which is also being called demonetisation.

“The PM’s narrative has changed. He started by saying it (currency ban) is against black money, then (against) terrorism, then (against) counterfeit currency and later (against) cashless economy,” the Congress vice president said.

The Nehru-Gandhi scion also slammed the ruling BJP for saying the Opposition is disrupting Parliament proceedings.

“The responsibility of running the House is with the government and the Speaker, not (with) the Opposition,” he said, adding that if the PM “comes to the House for debate, we won’t let him run.

But, “PM Modi is running away,” Rahul said.

The Congress leader was referring to the fact that PM Modi has attended Parliament proceedings several times this session, but has yet to speak or answer questions on demonetisation.