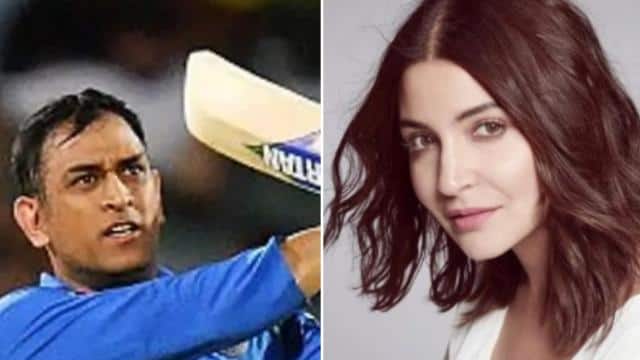 Former captain of the Indian cricket team Mahendra Singh Dhoni announced his retirement from international cricket through social media on the evening of 15 August. The news of Dhoni’s sudden retirement thus shocked everyone. Along with sports world, politics and Bollywood celebrities also gave their reactions to Dhoni’s retirement. In this episode, Bollywood actress Anushka Sharma also thanked Mahendra Singh Dhoni, giving her response.

Mahendra Singh Dhoni, India’s most successful wicket-keeper batsman, announced on Instagram post, “Thank you very much for your love and cooperation in my career. You should consider me retired from 7.29 pm today. ” He did not play any match after India’s defeat to New Zealand in the semi-finals of the ODI World Cup held in England last year.

Emotional post by wife Sakshi on Dhoni’s retirement, wrote- You must have stopped tears while saying goodbye to your passion

Anushka Sharma wrote a message for him with a picture of Dhoni in his institute. Anushka wrote – Thanks for the MSD memories, which we will never forget.

Apart from Anushka, other Bollywood celebrities also gave their reactions to the announcement of Dhoni’s retirement. Commenting on Dhoni’s post, Ranveer Singh wrote – Love you Mahi Bhai. Thank you for making us all proud.

Vicky Kaushal wrote in his Instari – What was the innings. Thank you Mahi for everything. Abhishek Bachchan tweeted: “End of an era …. Thanks for all the memories.”

End of an Era. Thank you @msdhoni for all the memories! All the best for your next innings. You filled a nation with belief and pride. One of the greatest of all time. 4

No retirement from our hearts ♥ ️ #MSDhoni @msdhoni pic.twitter.com/SMRA15L00L

My dear @msdhoni!
The real flight of life is still left,
There are many tests of life left,
We have only measured a handful of land,
The whole sky is still over !!!
May we miss you in the playground! But you will always rule our hearts. Live.
Your film father. 4 pic.twitter.com/qdkn1lT0KJ

Nooooo !!!
You regarded always known the best ..
Thanks for the entertainment 🙏🏽🤗 #Dhoni #MSDhoni pic.twitter.com/0Jwqb4hgaT

Looks very yummy.
Regards too much …
thank you for all the gentleness and the aggressive entertainment Suresh Raina bro 🤗🙏🏽#rainaretires #raina pic.twitter.com/Ycvq6Di6Xi

Immense respect for M.S Dhoni for not just being an outstanding player but also setting an exceptional example with his conduct and journey, on & beyond field https://t.co/cuRg79nUwP

There will be a lot of players & captains bt there can never b another #Dhoni..D man who always lead frm d front ..many play fr records you played to win and made records …. India will miss you terribly.Thank you #MSDhoni & #Raina for your immense contribution to Team India!

Let me tell you that there are many records in the name of Mahendra Singh Dhoni, but there is such a record, which is impossible for anyone to break. It is impossible for any captain to break this record now because the ICC has ended the tournament after the 2017 Champions Trophy. No other captain will win all three titles of the World T20, World Cup and Champions Trophy. Dhoni is the only captain in the world, under whose captaincy the team has won all three ICC Trophies. India has won the titles of 2007 T20 World Cup, 2011 ODI World Cup and 2013 Champions Trophy under the captaincy of Dhoni.

Bhumi Pednekar had failed in ‘Film School’, had to pay a loan of Rs 13…

Manasi Singh Oct 30, 2020
The new captain of 'Bigg Boss 14' is Ejaz Khan. In the upcoming episode Ejaz is about to send the members of the…

Kunal Khemu gets his tattoo done on foot, ready in 30 hours, video…

Bhumi Pednekar had failed in ‘Film School’, had to pay a…