Now Chinese companies started to be eliminated from Metro Projects, will not work in two cities 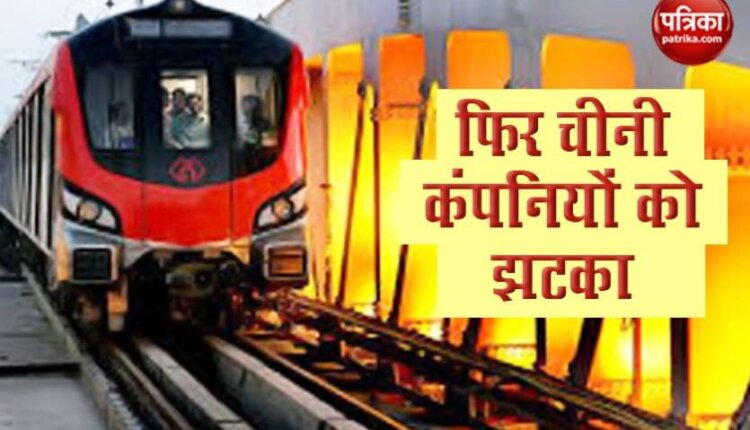 new Delhi. Seeing the Government of India, now the boycott of Chinese companies has started from the state governments too. The name of Haryana, Haryana, Uttar Pradesh (Uttar Pradesh) has also been added to this list. On behalf of UPMRC, Metro projects running in Kanpur and Agra have removed Chinese companies and given them to Bombardier Transport India. Supply, testing and commissioning, control and signaling of metro trains (rolling stocks) for Kanpur and Agra are in progress. For this work, tenders were drawn by UPMRC on 18 February 2020, in which four companies included Chinese companies.

To get lentils and rice in free till November, this work will have to be done before 31 July

Disqualification done to Chinese company
According to the media report, MNRC has decided to give both these projects to Bambardiar Transport India on Friday. Metro trains will be supplied from the company’s plant in Gujarat. Each train will have 3 coaches. Of these, 39 trains will be brought to Kanpur and 28 trains to Agra. Let me tell you that four international companies had bid for this project. Which also included a Chinese company. The Chinese company was shown a way out of competition due to technical evaluation.

There can be major decisions regarding GST rates, know what will be the effect on the general public

Kanpur Metro’s work started
The work of Kanpur Metro has started. The UPMRC completed the Lucknow Metro Phase-1A project in a record time of just 64 weeks. A time limit of 65 weeks has been given for the first metro train in Kanpur and Agra. According to Keshav Kumar, managing director of UPMRC, the distance between the two stations in both Kanpur and Agra will be around one kilometer. Whose speed will be kept at 80 km / h.

With just daily investment of 74 rupees in LIC policy, lakhpati will become so many years