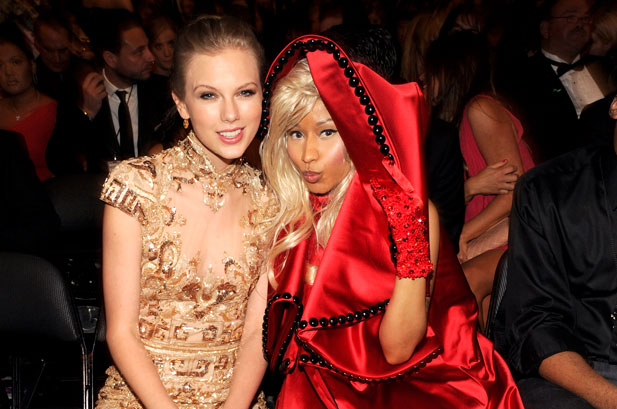 In celebrity cat fight news Nicki Minaj and Taylor Swift took shots at each other on twitter. Nicki Minay seemingly upset after not being nominated for Video of the year at the MTV Video Music awards tweeted her dismay at being overlooked.

Nicki Minaj tweeted “If your video celebrates women with very slim bodies, you will be nominated for video of the year.”

The tweet is believed to be taking a shot at Taylor swift’s nomination for the music video ‘Bad Blood’.  She also tweeted, “When the ‘other’ girls drop a video that breaks records and impacts culture they get that nomination.” The music video ‘Anaconda’ became something of a sensation for Nicki Minaj’s twerking and for promoting other female body types in an industry dominated by supermodel size zero figures.

“I’ve done nothing but love & support you,” Taylor Swift tweeted to Nicki Minaj. “It’s unlike you to pit women against each other. Maybe one of the men took your slot.”

@NICKIMINAJ I’ve done nothing but love & support you. It’s unlike you to pit women against each other. Maybe one of the men took your slot..

The tweet though not targeted at Taylor directly was assumed to be so by her fans and the media outlets. Nicki Minaj was trying to bring awareness at the sheer neglect black artists often face in the music industry and was in her right to seek an answer to why a very popular music video was overlooked. Anaconda which has over 488 million views on YouTube broke several video streaming records including an incredibly 20.1 million views in the first 24 hours. “Huh? U must not be reading my tweets. Didn’t say a word about u,” Minaj said to Taylor “I love u just as much. But u should speak on this.” “If I win, please come up with me!! You’re invited to any stage I’m ever on,” Swift tweeted back trying to bring back solidarity to the exchange.

Jamaica Gives a Tough Defeat to the Us