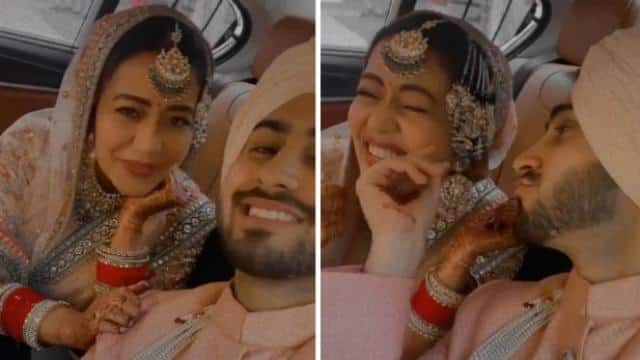 Bollywood singers Neha Kakkar and Rohanpreet have reached Punjab. There is a special reception party for his family and friends. Recently Neha Kakkar became active on social media after marriage. In such a situation, she shared an unseen video, in which she is seen singing a song for Rohanpreet Singh. Rohanpreet Singh is seen making a video of the song in selfie mode.

Neha writes while sharing the video, “We are liking our own song, Sabyasachi couple. Nehu the Vyah. ” In fact, Neha Kakkar is seen singing the recently released song Nehu the Vyah in this video. Rohanpreet Singh is seen in a naughty style in the video. Both are sitting in the car.

Please tell that Neha Kakkar is tied in marriage on October 24. His grand celebrations were attended by many celebs including Urvashi Rautela, Urvashi Dholakia, Avneet Kaur, Akhil, Jassi Lokha and Bani Sandhu. Earlier, Neha shared some unseen photos of the wedding on social media.

While sharing the photos, Neha Kakkar wrote, “Rohu and I wore outfits made by Falguni Shane Peacock India at the night wedding. Have to say, this is the best. ” Neha Kakkar then shared some of her solo photos, in which she wrote, “Rohanpreet Singh’s wife”.