NASA unveiled the sharpest images of the planet Pluto taken from the New Horizons spacecraft on July 14 this year. In the series of images taken, the spacecraft has captured a “variety of cratered, mountainous and glacial terrains”. The high resolution images of 250-280 miles per pixel of the dwarf planet are believed to be the best pictures till date.

In the image released, it shows the water-ice crust stuck together, also known as al-Idrisi Mountains, which surrounds the Sputnik Planum.

John Grunsfeld, former astronaut and associate administrator for NASA’s Science Mission Directorate, shared, “New Horizons thrilled us during the July flyby with the first close images of Pluto, and as the spacecraft transmits the treasure trove of images in its onboard memory back to us, we continue to be amazed by what we see.”

“These close-up images, showing the diversity of terrain on Pluto, demonstrate the power of our robotic planetary explorers to return intriguing data to scientists back here on planet Earth,” added Grunsfeld.

The images were captured through telescopic Long Range Reconnaissance Imager (LORRI), before New Horizons nearest approach to the dwarf planet. The icy-cratered plains in the images show the interior layering of craters. 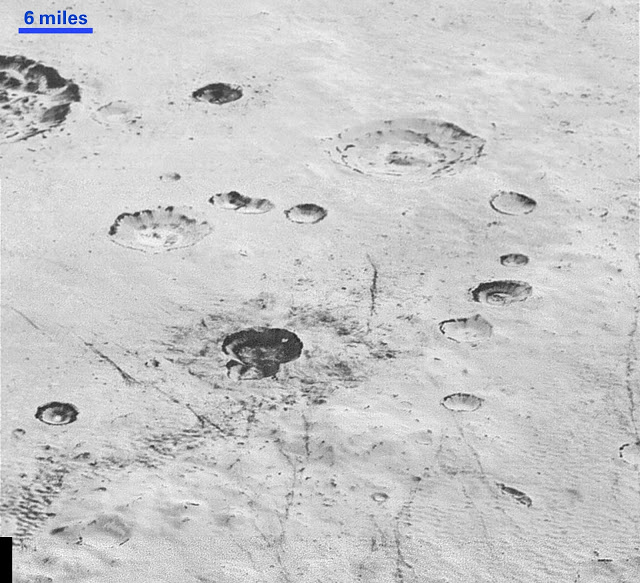 “Nothing of this quality was available for Venus or Mars until decades after their first flybys; yet at Pluto we’re there already – down among the craters, mountains and ice fields – less than five months after flyby! The science we can do with these images is simply unbelievable,” said New Horizons’s Colorado Principal Investigator Alan Stern. In a few images, it has also shown how faulting and erosion carved a few areas.