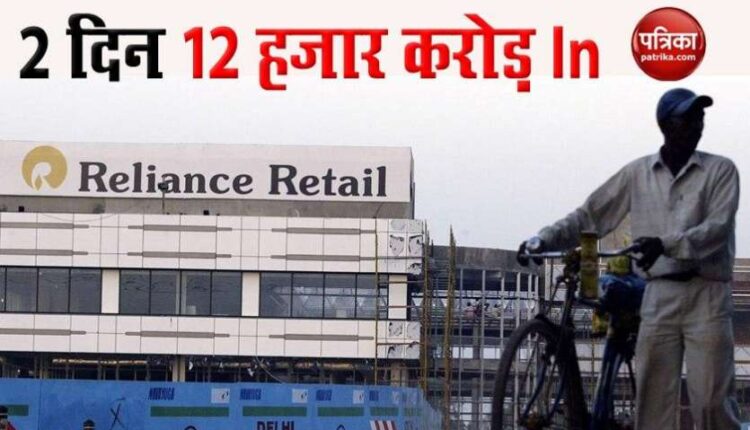 new Delhi. Ever since the news of the Tata Group Walmart deal has surfaced, Reliance Industries has started a stir. Now it is fast enticing foreign investors. In such a situation, the beginning of Reliance has started from the same investors who invested in the Jio platform. While Reliance took more than a month for retail from KKR and Silver Lake in one month, after news of the Tata Group and Walmart deal, Reliance has raised around Rs 12,000 crore in three big deals for retail in two days. After which Reliance Retail has got more strength. Let us also tell you which companies Reliance has finalized deals with between 30 September and 1 October.

Silver Lake increased its stake
On Wednesday, Silver Lake announced to increase its stake in Mukesh Ambani’s Reliance Retail Ventures Limited. Now Silver Lake will invest an additional Rs 1,875 crore. With this investment, the total investment of Silver Lake and its associates in Reliance Retail Ventures Ltd will be Rs 9,375 crore and the total stake of the company will increase to 2.13 per cent. Currently, Silver Lake has the largest stake in RRVL. Earlier on 9 September, Silver Lake invested Rs 7500 crore for 1.75% equity in RRVL as the first investor. At the same time, KKR announced on September 23 to invest Rs 5,550 crore for 1.28 per cent equity.

How much was invested in Jio platform
If you compare it with Jio Plataform, then Silver Lake has increased its stake in retail. Silver Lake’s stake in Jio was 2.08 billion with an investment of $ 1.34 billion. Which has increased to 2.13 percent in retail, while its Silver Lake has made a deal of $ 1.27 billion. Earlier, KKR had invested 2.32 per cent or $ 1.5 billion in Jio. While General Atlantic bought $ 0.87 billion stake in Jio with 1.34 per cent.