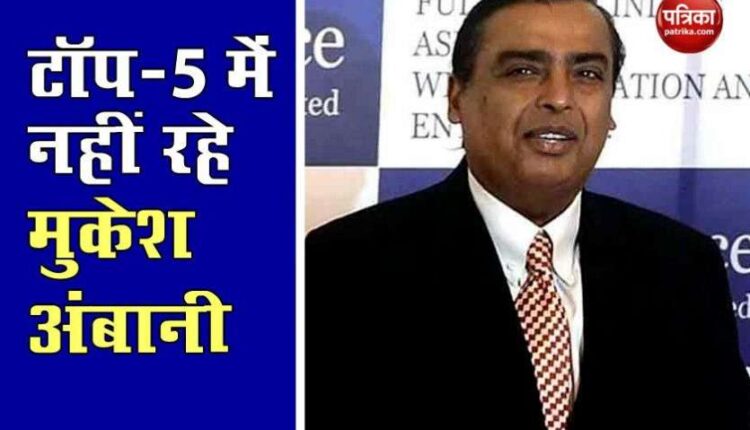 new Delhi. Mukesh Ambani has dropped out of the list of the five highest rich in the world. He is overtaken by veteran businessmen Mark Zuckerberg and Warren Buffet. In fact, Mukesh Ambani’s assets (Mukesh Ambani Net Worth) have seen a decline in shares of Reliance Industries Shares. Even today, Reliance shares have fallen. Let us tell you that for the last few weeks, Mukesh Ambani had become the fourth richest person in the world, beating the legendary businessmen. Due to the boom in global markets, shares of companies like Facebook and Hathway were seen rising. Which benefited Mark Zuckerberg and Warren Buffet.

Mukesh Ambani came from fourth to sixth position
If you look at the latest figures of Forbes, then Mukesh Ambani has dropped from fourth place to sixth place in the list of world’s richest people. Today, the total assets of Reliance shares have fallen to $ 78.3 billion. Today his property has seen a loss of 860 million dollars or 6400 crores rupees. Let us tell you that since last week, Mukesh Ambani’s Reliance Industries market cap had a loss of 25 thousand crores. Even today the company has suffered more than one percent. Due to which Mukesh Ambani has also suffered. Mukesh Ambani had assets of over $ 80 billion. In the last few days, his property has seen a loss of over 2 billion.

Mark Zuckerberg came in fourth place
On the other hand, Mark Zuckerberg and Warren Buffet have benefited from the boom in the US markets. Mark Zuckerberg has assets of $ 96 billion. Bernard is fourth in the family. While Warren Buffett came in at number five on the list with $ 79.6 billion. Elon Musk is at number 7 with 76.7 billion, Steve Ballmer at 8th, Larry Ellison at 9th and Larry Page at 10th. The first number remains Jeff Bezos and the second number Bill Gates.