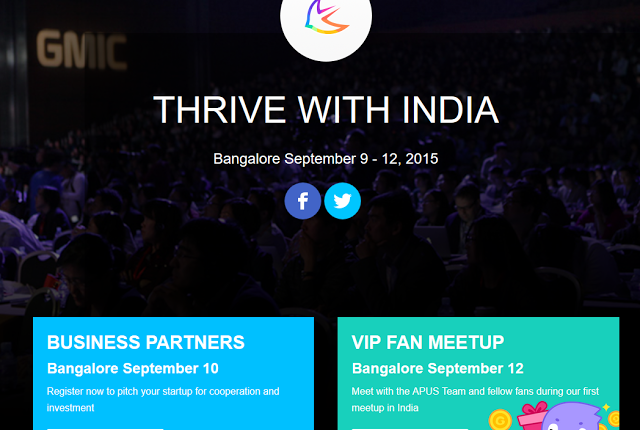 The 5th largest app developer on Google Play & most popular Android launcher app APUS by APUS Group is now looking to expands its business by setting up operation in India. APUS Group based out of China, will invest $15 million in Internet and mobile technology startups in India, to support the growth of the Indian startup ecosystem.

APUS Group was founded in 2014 by former Qihoo Vice President, Li Tao. The company made its first applications called as APUS launcher in July 2014 and attracted 1 million download in the first week of launch, due to its user experience and world’s most small android launcher.

The APUS Group went on to add additional features to its launcher such APUS Boost, APUS Search etc. The company attracted 200 million user by its app features.

The company have raised a total investment of $116 million in 2 rounds of funding from 5 investors which include Chengwei Capital, QiMing Venture Partners, SIG Ventures, Redpoint Ventures and Northern Light Venture. While the company was touted by WSJ as world’s fastest company to get into billion dollar club.

Li Tao, CEO and Founder, is coming to India next week till 12th September to attend the Global Mobile Internet Conference (GMIC), being held at Bangalore on 9th & 10th September 2015,
APUS is looking to connect with startups to collaborate on the growth of the selected ones. While it will also meet its fans in India.

Apart from APUS. Baidu, Cheetah Mobile, GWC, Oyo Rooms, MobiKwik and other leading startup from across the globe will be attending this event.