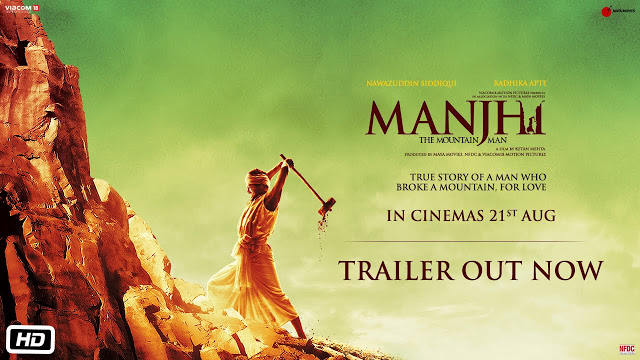 While actor Nawazuddin Siddiqui is gearing up for the release of his upcoming film Manjhi – The Mountain Man on August 21, reports claim that a censored copy of the movie has been leaked online. It happened when a copy of the film was sent to the censor board for approval. Be it any part of cinema; films has always been a soft target for the pirate market. It’s the third film in the current year whose censor copy has been leaked. Initially, it was Malayalam hit film Premam and then the recently released blockbuster Bajrangi Bhaijaan.

Directed by Ketan Mehta, Manjhi – The Mountain Man is inspired by a true story of Dashrath Manjhi who took 22 years to break a mountain to pave a way. It’s a small-budget film featuring Nawazuddin Siddique and Radhika Apte. Even Ketan believes that no other actor except Nawazuddin would have been able to enact this character.

As quoted by a leading agency, Ketan Mehta during one of the promotional events said, “Nawaz is the best actor of his generation which everyone believes nowadays. Secondly, his physical type also perfectly matches with Dashrath Manjhi on whom this film is based on. Manjhi too was a short man with a lean physique. The intensity in him was amazing, especially in his eyes and that same passion can be seen in Nawaz’s eyes. And this love has pulled him to this level today.”

Dashrath’s real life story was also shared on the fact-based reality show Satyamev Jayate, hosted by Bollywood actor Aamir Khan. Like Dashrath’s 22 year struggle and hard work, Nawazuddin has also worked for almost 15 years to survive and be a part of this industry. Hailed from a village in Uttar Pradesh, Nawazuddin had never imagined being a part of this exciting industry. He has now been a part of various hit films including Peepli Live, Kahaani, Kick, The Lunchbox and Gangs of Wasseypur II.

11 Dead, 50 Injured During Stampede in Jharkhand