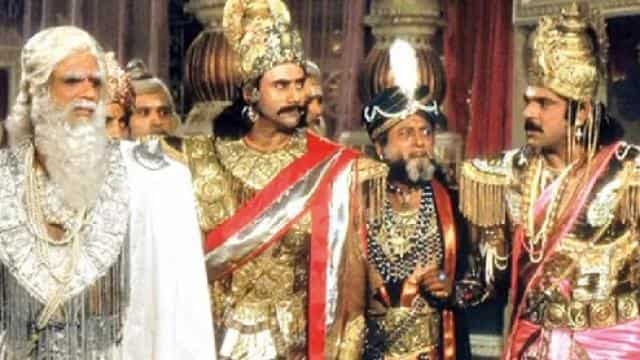 The religious serial ‘Mahabharata’ is being broadcast on Doordarshan during the lockdown in the country. Viewers are very fond of this serial. By now you have seen that Duryodhana is going naked to go to Mata Gandhari’s camp. Vasudeva is shocked to see them and asks how Duryodhana can go naked in front of his mother. Gandhari asks Duryodhana to come in front of me and stand up son. I am going to open this bandage on my eyes. I did not see your brothers, but will see you today. Gandhari removes the bandage from her eyes. Gandhari says that with my blessing, your body became thunderbolt. Now know what happened next in today’s episode …

12.32PM Duryodhana said that you are all cowards. I am unarmed and injured. I have taken the body of my brothers. My shoulders are broken. But Vasudev tell his nobles that I am not afraid. Will all of you cowards fight with me together or separately. Yudhishthir said that if you choose one of the five of us, I will give up if you defeat him. Duryodhana said that I will fight mace. Vasudeva tells Yudhishthira that he should have thought before making any promise. Bhima says that I will kill Duryodhana.

12.40 PM Bhima challenges Duryodhana for war. During this, Yudhishthra asks Duryodhana to wear armor before the battle. He then sends Sahadev to the camp to get Duryodhana’s armor. Sahadeve meets Gandhari. He asks what is happening in the battlefield. I have come to get Duryodhana’s mace and armor. Gandhari says that one thing to remember is that my son was also your brother.

12.30PM Duryodhana says that you killed my Gurudron and Karna with deceit. You do not deserve to be called Pandava Veer. Now this war will be for war only. Now what will I do with the throne of Hastinapur. All my brothers have gone to Mamashree. I no longer want the kingdom. I will give it to you after winning, but I will definitely fight you. I want to tell that I am the best hero. On this, Arjun said that this secret is not yours. Duryodhana comes out of the water.

12.25 PM Yudhishthra tells Duryodhana that Duryodhana you had invited this war. Because of you, 99 sons of Jyeshtha Matashree have received Virgit. Do not think that we cannot break the water bubble. Accept this war. Do not insult India by running away from death. Fight or accept defeat.

12.10PM Pandava brothers reach the battlefield with army but do not see Kaurava’s army there. Seeing this, Yudhishthra gets shocked and he asks his soldiers to find out about it. Yudhishthira learns that Duryodhana has gone towards the lake. Krishna says that Duryodhana does not have people to fight, so he must have gone to the lake to rest. The Pandavas go towards the lake with the army.