Madhuri Dixit’s husband did something similar, video of both going viral 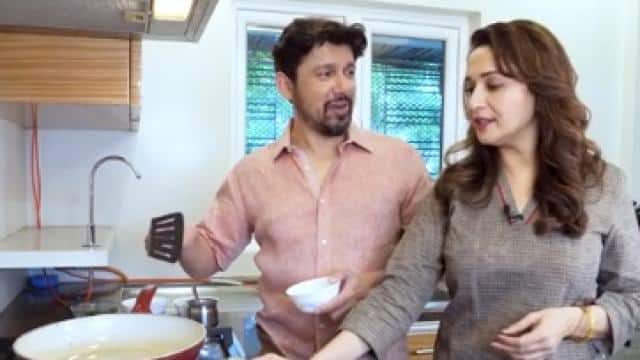 Madhuri Dixit is very active on social media. Recently Madhuri has shared a video of her with husband Shriram Nene in which Dr. Nene is making khichdi of sabudane. Madhuri helps them. Seeing Dr. Nene in the video, it is clear that he does not know cooking. Apart from this, he asks Madhuri, what does Quomin say in Hindi? So Madhuri says that it is called cumin.

Sharing the video, Madhuri wrote, ‘Sabudana Khichdi,’ Aikonch Bhuk Lagali na? Come, learn with me and Ram how to make sabudana khichdi my all time favorite. ‘

Let me tell you that Madhuri shared a lot of fun videos in lockdown which was liked by the fans. Earlier, he shared the video with the son. In this video, Arin is playing tabla in the beginning and Madhuri is doing some steps of her dance. But after this his son Arin arrives and he also starts doing some steps with his mother.

Sharing this video, Madhuri wrote, ‘In Quarantine we are able to do all that we have wanted to do for a long time. See what I wanted to do at the end of the video.

Seeing this incarnation of Disha Patni, Tiger Shroff reacted like this, the comment of actor’s mother Ayesha Shroff went viral

Singer made in lockdown

Madhuri released her song in lockdown called Candle. Madhuri made her digital debut through this song. This song of Madhuri was very good response.

Talking about Madhuri’s professional life, she was seen in the last film Kalank. Apart from Madhuri, the film had Varun Dhawan, Alia Bhatt, Aditya Roy Kapur and Sonakshi Sinha in the lead roles.

Do this work to withdraw money from Inactive PF account, you will get payment easily even after the company is closed

NPS: Open account in the name of wife, 45 thousand rupees every month with pension to get lump sum amount