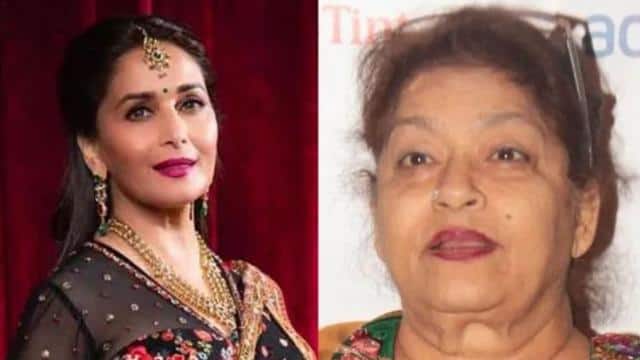 In the year 2020, many Bollywood stars left the world saying goodbye. On Friday, choreographer Saroj Khan passed away. She was suffering from illness for a long time. Now Madhuri has shared a throwback video on Twitter, in which she can be seen sitting on a couch with Saroj Khan. Saroj Khan was known for sitting and dancing. Madhuri is seen sitting with him and dancing to the song ‘Ek Do Three Four Five Six Seven …’. While sharing the video, Madhuri writes that everything with Saroj ji was very interesting. His energy was worth it. In the same way he has lived his life and I will miss him in the same way.

Recently, Saroj Khan was admitted to the hospital in Bandra, where she breathed her last. Bollywood has been deeply shocked by his death. Bollywood celebs are paying tribute to Saroj, who choreographed 2000 songs.

Every conversation with Saroj ji was full of knowledge, inspiration and energy. That’s how she lived life and that is how I will always remember her ♥ ️ pic.twitter.com/fzOPg2FU9N

Genitalia D’Souza, Ritesh Deshmukh, Manoj Bajpayee, Sunil Grover, Nimrat Kaur have sent emotional tweets in tribute to Saroj Khan. Famous choreographer Remo D’Souza, sharing some of his photos with Saroj Khan on Instagram account, wrote, “I am so lucky that I got a chance to dance with you.” Thank you very much for teaching me so much. I will always remember you. You will always be in our heart.

So this is Mira Rajput’s favorite dishes, Shahid’s wife answered the…

Anupreet Kaur Sep 30, 2020
new Delhi. Currently, the country is facing the brunt of the corona virus. Which has had the greatest impact on…

So this is Mira Rajput’s favorite dishes, Shahid’s wife…