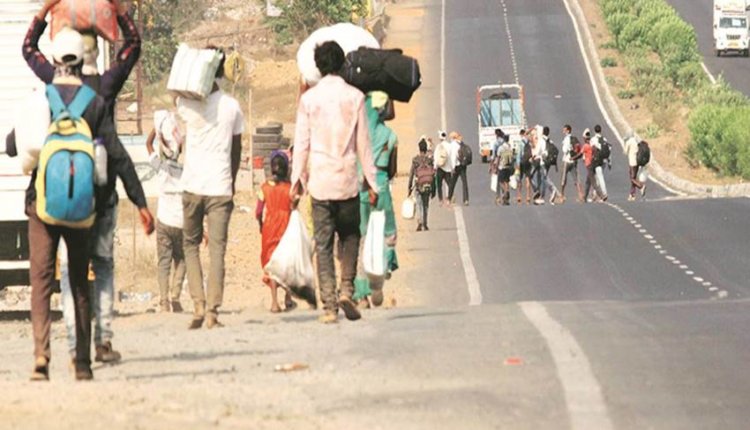 The process of death of migrant laborers going back to their state during lockdown is not being called to stop. In the recent Aurangabad railway accident, 16 laborers and some workers were killed by the overturning of a truck loaded with mangoes in MP. Now two more laborers are reported to have been killed in road accidents in Haryana and Uttar Pradesh. According to NDTV report, a laborer living in Bihar in Haryana was hit by a high-speed car, killing him. According to the police, another laborer who was going to his house by bicycle has died in Rae Bareli, UP.

According to the report, two migrant laborers were walking on the roadside at Ambala Cantt in Haryana this morning when they were hit by an SUV. One laborer died on the spot, while the other was seriously injured, who is undergoing treatment in the hospital. According to the police, the workers were heading towards Bihar. Suddenly the car entered at high speed and spun out of control. The driver is missing but the car has been seized.

In another incident in Rae Bareli, Shiv Kumar Das, a 25-year-old migrant laborer going from Bulandshahr to Bihar was hit by a car. According to reports, the brakes of the car had failed, after which the driver could not control the car. Due to which Das died and the driver is also badly injured. The car was badly damaged in the accident.

Millions of migrant workers have become unemployed due to the corona virus lockdown. They have neither work nor money to buy food and drink. In such a situation, migrant laborers living in the city are forced to return to their homes. These laborers are trying to cross the border of the states by hiding on foot, or through the tracks, or in a sister.

According to media reports, so far more than 70 laborers who have come back home have died in the country. Recently, in Aurangabad, 16 laborers were trampled by a freight train, and 5 laborers were killed when a truck overturned near Patha village in Narsinghpur in Madhya Pradesh.