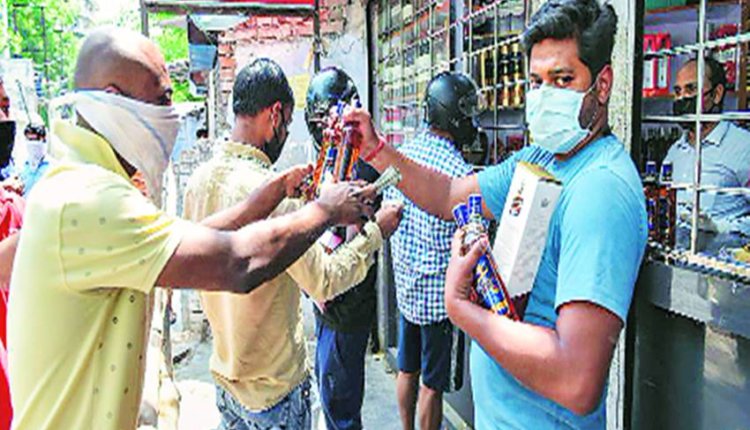 Since May 4, liquor shops have opened in all states of the country. Crowds are overflowing at shops. Questions are raised about the protective distance during the corona infection. There is a possibility of infection and spread from this. But the emphasis of the state governments is to increase their income and income from alcohol. Nearly 40 days later, the state governments’ income from the shops opened has increased tremendously. Record sales of alcohol have been recorded in several states.

How is earning
Sales in liquor stores have established many records. The Karnataka government has earned Rs 45 crore from the sale of liquor in just one day. The first day’s earnings in Andhra Pradesh were Rs 40 crore. There is a breakdown in liquor shops in Delhi. The Excise Department of Maharashtra has set a target of earning two thousand crore rupees only in May. There are plans to earn 80-100 crores daily. In Delhi, the price is being charged by imposing 70 percent corona fees. The state argues that the earnings will be used to treat patients.

Punjab Chief Minister Captain Amarinder Singh wrote a letter to Prime Minister Narendra Modi and Union Home Minister Amit Shah last week seeking permission to open liquor contracts. The captain cited the deteriorating financial situation behind it. He said that the state is losing out of 521 crore income every month. More or less similar arguments were given by all state governments. Gujarat, Bihar, Mizoram and Nagaland have complete prohibition. In Haryana and Andhra Pradesh, liquor prohibition failed.

Delhi had collected excise duty of around Rs 5,500 crore. According to a research by the All India Institute of Medical Sciences, 16 million people consumed alcohol before the full ban, out of which three crore people were addicted to alcohol. In Chhattisgarh, in the last 15 years, the government decided to sell alcohol itself after seeing a 100-fold increase in income from alcohol.

Half of consumption in southern states
Out of the total alcohol consumed across the country, about half of the alcohol is consumed in five southern states alone. The government of Delhi earns 12 percent of its revenue from alcohol, but its share in the total alcohol consumption of the country is only four percent. According to a report by rating agency Crisil, Andhra Pradesh, Telangana, Karnataka, Tamil Nadu and Kerala consume 45 per cent of alcohol.

But their revenue income from alcohol is only 10-15 percent. In this too, Tamil Nadu and Kerala get 15% of the revenue from liquor.
Andhra Pradesh and Karnataka get 11 percent of this and Telangana gets 10 percent of their total revenue. Tamil Nadu accounts for 13 percent of the total alcohol consumption in the country. Karnataka consumes 12 percent. Maharashtra has the highest tax on liquor in the country, but the state’s revenue share is just eight per cent.

Opinion of experts
Before the full ban, every state has been earning Rs 700 crore daily just from the sale of liquor. The total annual earnings of all the states in the 2019-20 financial year has been Rs 2.48 lakh crore. It is not easy to ignore this income figure.
– Amrit Kiran Singh, President, International Spirit and Wine Association of India

Article 47 of the Constitution of India mentions the ban on alcoholic beverages that cause harm to health. Article 47 does not directly ban liquor, but the prohibition on narcotics, including alcohol, is stated to be the primary duty of the government.
– Upendra Mishra, Advocate, Supreme Court