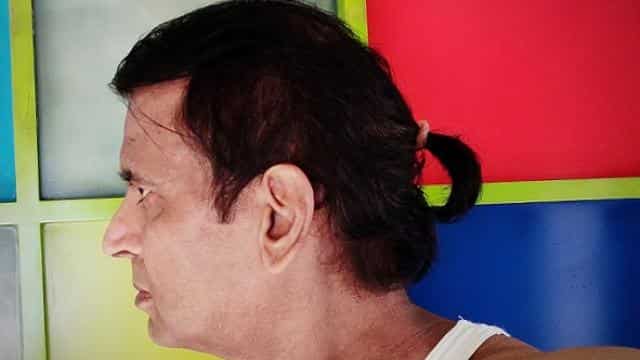 The process of slowly opening the lockdown has started in the country, but still people are avoiding going out of the house. People are stepping out of the house only when there is urgent work. Due to the fear of Corona, people are not going to salons from common people to celebs, but are getting their hair cut from the members of the house. Meanwhile, Laxman of Ramayana cut his hair at home and shared his new look on social media.

Sunil has posted a picture of himself on Twitter account, in which he is seen in ponytail hairstyle. This look of Sunil is being well liked. Fans are praising this new look of his. In the caption of the photo, Sunil Lahiri wrote, “In this lockdown, also teach us the art of cutting head hair. Just could not cut the back hair. This lockdown taught me how to cut my own hair, except for the back hair. ”

Let us tell you that Sunil Lahiri has been telling his fans interesting stories related to the shooting of Ramayana for some time. Recently he has told that the scene of the battle of Ram and Ravana was shot by jugaad. Sunil shared a video on his Twitter account, in which he said, you must have seen that there is a war between Ram and Ravana. A large army is fighting behind Rama and Ravana, but the fact is that it was shot with very few people. Because a lot of people had come at the time of the previous episode, but this time the villagers did not come. Then a mind was put on how to show a very large army.

Deepika Padukone reprimanded paparazzi, said- Why are videos of Sushant Singh Rajput being monitored without the permission of his family

Large mirrors were called for. Of 8-8 feet. They were placed all around inside the studio and just one space was left vacant. If mirrors are placed all around you, you will see that your image will look multiple times. In this way, the camera was placed on an empty space. During this time it has been taken care that the camera is not visible in the mirror. By doing this, many people were also seen in the mirror. Because of this, such a large army was seen behind Ram and Ravana. ”