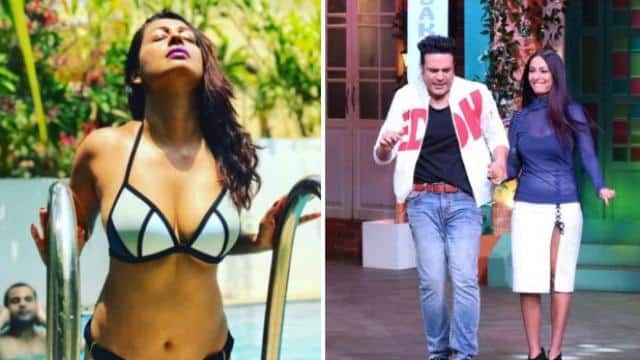 Actress Kashmiri Shah is in the news these days. In fact, his transformation photos are becoming increasingly viral on social media. They have created panic on the internet. Kashmiri has lost 10 kg of weight. After appearing in shape, she is seen flaunting her body. She is constantly sharing photos and videos on social media.

Another bold photo of Kashmiri Shah is becoming increasingly viral on social media. In this, Kashmiri Shah is seen posing in the pool wearing black and white bikini. At the same time, husband Krishna Abhishek can also be seen inside the pool in the background.

Let us know that this time Kashmiri Shah is going to enter the house by becoming a contestant of ‘Bigg Boss 14’. Kashmirira has also joined the race to win the trophy. In such a situation, his fans are quite excited. Apart from this, Kashmirira Shah spoke openly about the transformation. He had said that he has worked hard to keep his body fit. Speaking to E-Times, Kashmira said, “When I was once shopping with Krishna in the US, I noticed that I was not able to fit in small and medium size. Then I felt that my weight had increased significantly. Kashmira said that Krishna’s cousin encouraged him. “

Kashmira said that I started eating in small portions and in 15 days I lost 3 kg weight. This increased my confidence and then I started doing a lot of workouts. When the lockdown happened, I started wearing masks at home too, so that I don’t eat too much. By the time the lockdown was lifted, my weight had dropped to 59 kg and today my weight is 56.4 kg. I am proud that I accomplished my goal.