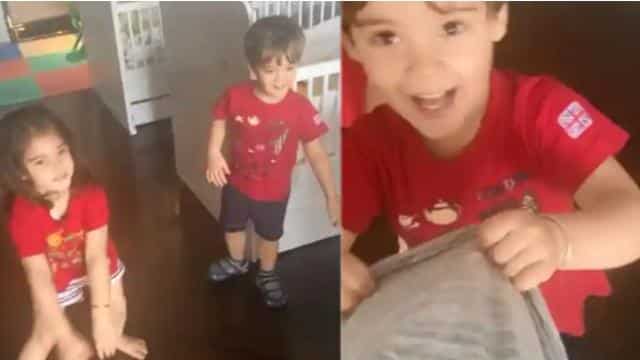 Filmmaker Karan Johar is trying to keep his twins (Yash and Roohi) entertained due to the lockdown. They keep posting videos related to their dance, fight, fun, on social media. Recently, he has shared a dance video of Yash and Ruhi. In this, both are seen trembling on the song ‘Girl Aankh Mare’. And they are dancing like no one is watching. Ruhi is dancing lately on the floor. At the same time, Yash is seen having fun with his Dada (Karan Johar).

Posting the video, Karan writes that today our day started with dance performance. And see how I was drawn to the dance floor. Lockdown with Jauhars. Grab the hashtag. Three-year-old Yash and Ruhi are seen dancing without worry. At the same time, Karan Johar’s mother Hiroo Johar is sitting on a chair.

Let me tell you that Yash and Roohi have already become strong fan followers on social media. The videos of both are being well liked. Commenting on Karan Johar’s post, a user wrote that their actions are fun, both are very cute. At the same time, another user wrote that wow, your children are clever and talented. After this, the third user wrote that he has also done a good dance with Tiger Shroff.

Earlier, Karan Johar posted a video of his twins (Yash and Roohi) on social media. In this funny video, Yash and Roohi were seen playing with the shower. Karan was heard saying from behind that what will you do with the shower. Yash was seen saying that I want to wash you with this, let’s remove clothes quickly.

At the same time, when Karan asks Ruhi what you are doing here in the shower, she says that you have become very dirty. Let us tell you that Karan Johar often keeps posting videos of his children on social media. He first posted videos of the closet (a separate room for holding clothes), then videos made in the kitchen and now in the bathroom.