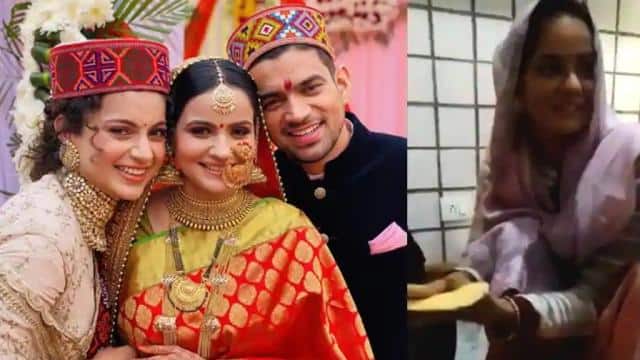 Kangana Ranaut keeps sharing family photos and videos on her social media account. Now he has posted a video in which his newborn sister-in-law is seen making maize bread. Kangana told that she remembered her mother after seeing her cooking in the kitchen like this.

Awww just received an endearing video of my newly married Bhabhi, trying to make makki ki roti, she is a doctor hugely accomplished young independent woman yet she is so rooted, in this video she reminds me of my mom when she was young. Tears of happiness ❤️ pic.twitter.com/cfySO9Ekpu

In the video, Kangana’s sister-in-law is seen in Winter Outfit. He has a scarf on his head. She is seen trying to give round shape to maize bread with her hands. It is known that Kangana’s brother Akshat married Ritu in November last month. During this, Kangana shared many photos and videos of wedding celebrations, which were very much discussed.

Taapsee Pannu’s body gave a response in preparation for ‘Rashmi Rocket’, the actress expressed pain in the video

Talking about Kangana Ranaut’s professional life, she has recently completed shooting for the film Thalaivi. Apart from this, she has action films like ‘Tejas’ and ‘Dhakad’ for which she is undergoing training these days. Kangana’s action avatar will be seen in these films.