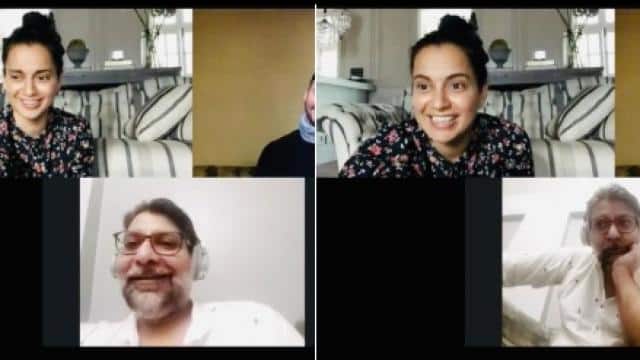 After a long lockdown in the country, now the film industry is slowly coming back on track. Many stars are returning to shooting sets. However, the corona virus has changed the way the entertainment industry works. Care is being taken on the set about Corona. Meanwhile, actress Kangana Ranaut has also started working on her film Dhakad.

Kangana Ranaut’s Twitter team shared some photos. Along with this, it was told that Kangana is understanding her character and story with the film’s peers. In pictures, she appeared in a virtual script reading session. Sharing the photos, it was written, “This is a virtual script reading session for Kangana Ranaut. Work on the film Dhakad has started.

‘Dhakad’ is an action film directed by Rajneesh Raji Ghai. In this Kangana will be seen doing dangerous stunts herself. The film’s poster was released last year, in which Kangana was seen carrying a heavy gun in her hands. Along with this, a teaser of it was released. Kangana’s action avatar was seen in it.

Kareena Kapoor did a bang dance in a red outfit, fans are watching the video again and again

Kangana was earlier seen in the film Panga. It was a female-centric film, which was well received. Apart from him in the film, stars like Pankaj Tripathi, Richa Chadha, Neena Gupta also won the hearts of the people with their performances.

Amitabh Bachchan shares his photo with Abhishek and Shweta, says- how did it become so big?