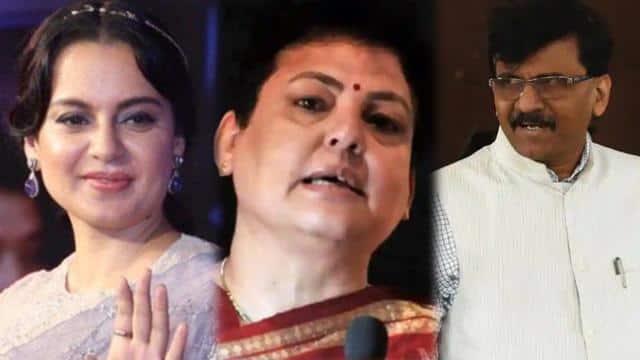 The issue of Shiv Sena vs Kangana Ranaut has been continuously gaining momentum. The National Commission for Women has also entered the controversy after the Shiv Sena MLA threatened to ‘break her mouth’. Giving a clean chit to Kangana, National Commission for Women Rekha Sharma has said that Shiv Sena MLA Pratap Sarnaik should be arrested immediately. He also questioned the ideology of the attacking Shiv Sena against Kangana.

Rekha Sharma, speaking to ANI news agency, said, “In none of Kangana’s tweets, she did not feel that she was a traitor or threatened any person.” This reveals the ideology of Shiv Sena leaders that if women are talking freely, they cannot bear them. ”

Earlier in a tweet, Rekha Sharma said, “According to ANI, Shiv Sena MLA Pratap Sarnaik has threatened Kangana Ranaut in an interview. CP Mumbai Police arrest him (MLA) immediately. The matter has been taken suo motu cognizance. ”The Shiv Sena MLA has said that if Kangana comes to Mumbai, the women workers of Shiv Sena will break her mouth. Sarnaik also said in the tweet that Kangana should be booked for treason for comparing Mumbai to Pakistan-occupied Kashmir (PoK).

According to @ANI @ShivSena MLA Pratap Sarnaik threaten @KanganaTeam in an interview. He must immediately get arrested @CPMumbaiPolice. Taking suo motu. pic.twitter.com/S0lUN2zobX

Actually, Kangana had recently made comments about the city of Mumbai and the police, on which the controversy has arisen. Kangana had said that she feared the Mumbai Police more than the people she calls the movie mafia. On this, Shiv Sena leader Sanjay Raut had allegedly told Kangana that if he is scared of Mumbai Police, then he should not come here.

Kangana had tweeted a news linking Raut’s statement, “Why has Mumbai started getting occupied by Pakistan?” For Haryana or Himachal Pradesh Police security is required and she will not accept security of Mumbai Police.

After this, Shiv Sena, NCP and Congress are attacking Kangana. In many places Shiv Sena demonstrated against Kangana, Shiv Sena leader Sanjay Raut and Maharashtra Home Minister Anil Deshmukh advised Kangana not to come to Mumbai or Maharashtra. Kangana has also openly said that she is coming to Mumbai on September 9 and if anyone has the courage to stop.

Sukanya Samriddhi Yojana: This scheme of post office is beneficial for daughters, will get 3 times return on maturity