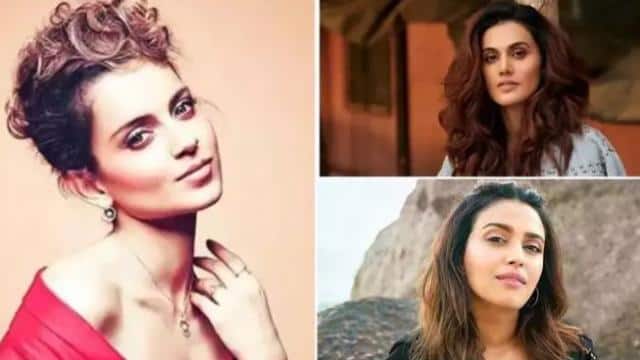 Bollywood actress Kangana Ranaut has made many shocking revelations in an interview recently. Since then, it is being discussed in social media and Bollywood industry. All are expressing their opinion. The queen actress has once again given a big statement on the movie mafia and nepotism in this interview. Kangana Ranaut has been fighting a war on nepotism since the beginning, but after the death of Sushant Singh Rajput, this fight is spreading like fire. Kangana Ranaut has called Swara Bhaskar and Taapsee Pannu a ‘B Grade’ actress in her interview. In such a situation, Taapsee and Swara kept their talk by tweeting. But Kangana Ranaut again gave a befitting reply, writing that Sushant, who has clearly stated in his Instagram chat and interview that he was bullied. The movie is in the mafia industry, confirmed this. But since Kangana Ranaut started demanding justice for Sushant’s death, Taapsee, Richa and Swara started trying to remove themselves completely from this. Why?

Sushant who had complained of bullying in his Instagram chats, giving interviews & confirming presence of movie mafia has bn killed but @reallyswara @taapsee & @richachadha trying their best to deviate the conversation #KanganaRanaut has strtd for getting Justice for Sushant.Why?

Let me tell you that Taapsee Pannu wrote in a tweet that I have heard that our results have also come after 10th and 12th. Our grade system is now official, but till now the value system was used on the number system, right? I cannot take advantage of someone’s death for my revenge. I cannot make fun of this industry which made us recognize.

Swara Bhaskar responded to Kangana Ranaut by tweeting that starving outsiders, B grade actresses, but better looking and better actors than Alia Bhatt and Ananya Pandey. I think it is complementary. Swara has written this thing tightly. Along with this, Swara writes that thanks Kangana, I think you are beautiful, a good actor and a good person too. Always shine

We are also needy outsiders and B grade actresses in the wheat affair of Nepotism. ♀️🤷🏾♀️🤷🏾♀️😥😥 #Nepotism https://t.co/bjy6mNGD7j

Thanks @taapsee for highlighting that the need of the hour is solidarity and sanity. When shoots have come to a standstill, cast / crew have no jobs, we must create a positive work culture! Let’s desist from anything counter-productive that’ll increase toxicity in our industry! 🙏❤️ pic.twitter.com/CuYAuVNT7L

Richa Chadha wrote in a tweet that thank you Taapsee, it is time we all should live together. The shoots are on hold, the cast and crew have no job, so we should create a positive work culture. No one should stop answering themselves. The industry will be safe and poison will not enter it.