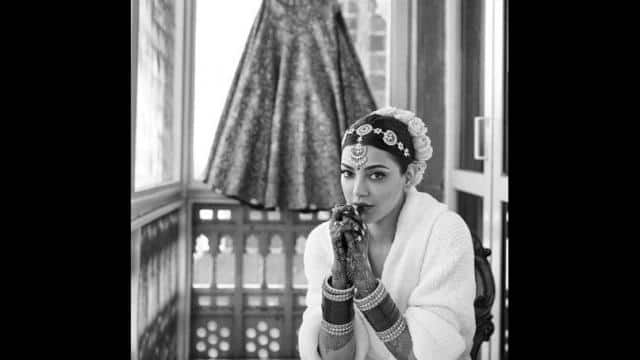 Bollywood actress Kajal Aggarwal is going to marry Gautam Kichlu on October 30 in a private ceremony in Mumbai. Kajal is very excited about marriage. After pictures of turmeric ceremonies, Kajal has now shared the pre-wedding photo. This is his ‘Half Bridal Look’. Sharing the photo, he wrote, “Peace before the storm”.

She has shared her black and white photo on Instagram. She looks gorgeous in this ‘Half Bridal Look’. In the photo, Kajal is wearing a bangle in her hand. Kajal kilt is also seen behind. Seeing this beautiful photo, now his friends and fans are eager to see his full bridal look.

Seeing the photo, Sonu Sood could not live without commenting. He wrote, “Many congratulations friend, my party is yet to go”. Kajal’s friend Lakshmi Manchu wrote, “You look gorgeous”. Swapnil Shinde wrote, “We are eagerly waiting to see you all ready”. Along with this, the fans are also praising fiercely. One fan wrote, “Wow! You look very beautiful “. Another fan wrote that he is desperate to see photos of their wedding.

Let me tell you, earlier some photos of Kajal were revealed on social media, in which she was seen having a pajama party with friends. Kajal was wearing a maroon bathing suit and her friends were seen in night suits. It seemed as if these pictures were the first from her pre-wedding ceremony because the mehndi was not visible in her hands.

Reliance boom could not recover the falling market, closed on red mark for third consecutive day