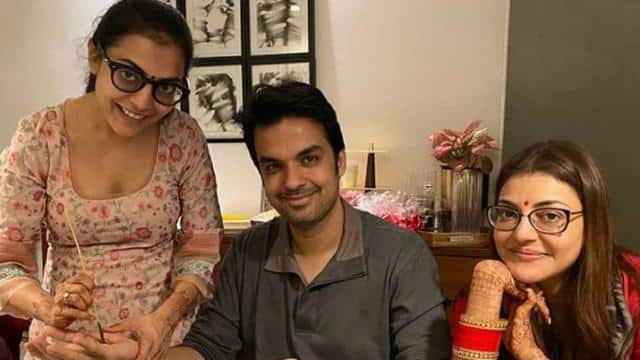 Actress Kajal Aggarwal has tied up with businessman Gautam Kichloo on October 30. Now today she is celebrating her first Karva Chauth with her husband. On this special occasion, Kajal has wished Gautam Kichlu in a special way. Kajal has shared a photo of her on Insta Story, in which she is seen wearing a mask. He wrote in the caption, ‘First Karva Chauth Mubarak Ho.’ Along with this, Kajal has shared a heart emoji.

Apart from this, another photo of Kajal is going viral on social media, in which she is seen with husband Gautam and sister Nisha. It can be seen in the picture that Kajal’s sister Nisha is applying Mehndi in the hands of her brother-in-law Gautam. This photo is being fiercely liked and shared.

Sonu Sood is also helping the needy during shooting in Hyderabad, video surfaced

Away from home on Karva Chauth, wife Meera wrote message for Shahid Kapoor – I love you, but I love eating too

Earlier, Kajal shared some pictures of her pre-wedding ceremony which was well received. He had posted some photos with fans during Radha Krishna Satsang and Gaur Puja. Let us know that Kajal Aggarwal and Gautam Kichloo are married in Taj Mahal Palace Hotel in Mumbai. Only family and close friends attended this wedding. Kajal wore a lehenga designed by designer Anamika Khanna at the wedding. At the same time, Gautam was seen in a white color sherwani.

The stock market closed with a gain of 350 points, good recovery in Reliance shares