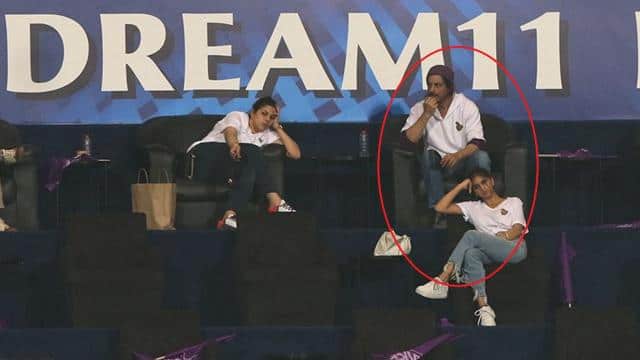 Kolkata Knight Riders (KKR) defeated Chennai Super Kings (CSK) by 10 runs in the 21st match of the 13th season of the Indian Premier League (IPL). The match was very exciting and at one time it seemed that CSK would easily win this match, but after that KKR bowlers gave the team a great comeback. The fear of defeat was also seen on the face of KKR co-owner Shah Rukh Khan and his daughter Suhana Khan at the time when KKR was tensed by CSK.

KKR vs CSK: Know who was responsible for captain Dhoni’s defeat

Shahrukh was present at the Sheikh Zayed Stadium in Abu Dhabi to watch the match with his daughter Suhana. Pictures of the match have been shared on the official page of the Indian Premier League, in which Shah Rukh and Suhana are also seen. During the match, social distancing was also seen between Shah Rukh and Suhana who came to support KKR. There was a time during the match when Suhana was seen with her hands on her head, while King Khan’s face was also blown away. Kolkata team was all-out by scoring 167 runs in 20 overs. In reply, CSK’s score was 99 for 1 in 12 overs at a time. Shane Watson and Ambati Rayudu were batting well together and together they brought CSK on the path of victory. Rayudu was dismissed by Kamlesh Nagerkoti for 30 and KKR returned to the match. After this, the KKR bowlers screwed over the match so that CSK’s team could manage 157 runs for five wickets in 20 overs. KKR bowlers curb the pace of runs and meanwhile CSK lost four wickets in six-seven overs. CSK could not recover in the match after that and KKR won by 10 runs. Shah Rukh is currently in the United Arab Emirates (UAE) and is seen at the stadium to support the team. KKR’s team reached the third position in the point table with three wins from five matches.

After 226 days, the stock market level increased to 40 thousand, the Sensex rose by more than 430 points.