Inflation to hit from April 1, from milk to car-fridge 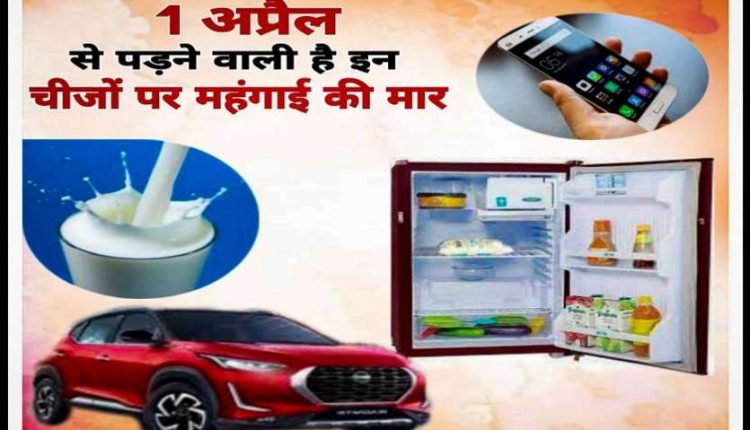 new Delhi. The new fiscal year is scheduled to start from April 1, 2021. With the beginning of this new financial year, there will be a huge impact on the pockets of the people. Because now from April 1, many of your needs and everyday things will be affected by the impact of inflation. Everything from milk, electricity and cars, bikes, air travel will become expensive. Not only this, you will also have to pay a huge price to buy a smartphone.

Also read: – Rules related to cooking gas, PF and pension will change in 7 days, it is important to know in time

Buying a car, bike will be expensive

For those who are thinking about buying a car or bike right now, there is a good chance that they buy all these things before 31 March. Because after this companies are going to increase the price. Companies like Maruti, Nissan have even announced a price hike.

This year the effect of inflation will also be seen in things that provide relief from the heat. Since April 1, AC companies are also planning to increase the price. Companies are increasing the price of AC in view of the prices of raw materials. Now the price of AC per unit can increase from Rs 1500 to Rs 2000.

Air travel will be expensive from April 1

Now traveling by air can be quite overwhelming for you as the government has decided to increase the minimum fare for domestic flights by 5 percent.

Milk will be expensive from April 1

Will have to pay more for electricity

People of Bihar may have to pay higher bills for electricity from 1 April. According to the power department, the South and North Bihar Power Distribution Company has proposed to increase the electricity rate by 9 to 10 percent. If this proposal is approved, then electricity rates in Bihar will increase.

10% of crude oil rolled due to these 5 reasons with Corona wave, know how cheap petrol-diesel has become