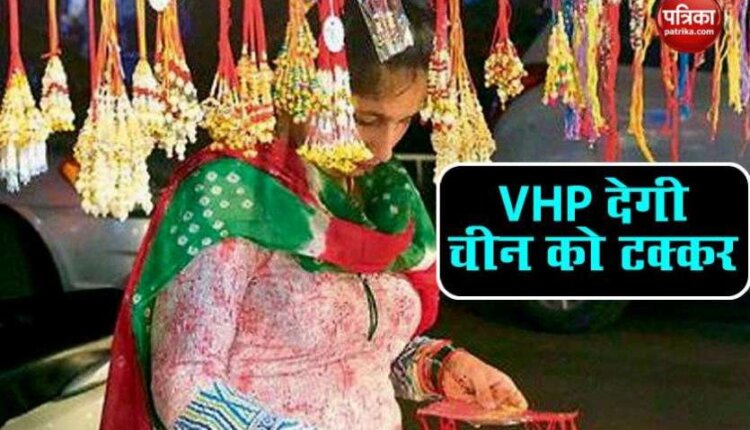 new Delhi. The Sangh Parivar is taking an increasing part in the direction of boycott of sugar product and being ‘vocal for local’. In this direction, where the Sangh Parivar is running public awareness on the one hand, on the other hand it is also promoting cottage industries under self-supporting schemes. In this series, Vishwa Hindu Parishad has taken the initiative to prepare Swadeshi Rakhi on a large scale in Delhi. The responsibility of making the rakhi has been entrusted to the Matriashakti Dugarwahini members of the Vishwa Hindu Parishad, Delhi. More than 120 members of the mother power Durga Vahini are engaged in this work.

Emphasis on indigenous clans
Apart from this, the cottage industries being run in Delhi are also being approached, so that indigenous bakhi gets access to the capital markets of Delhi before Raksha Bandhan. Delhi Province convenor Sunita Shukla said that the Prime Minister has given a call to vocalize the local. We want people not to use Chinese ashes but to use indigenous ones only so that the country becomes strong and self-sufficient.

Also read: Eight candidates in the race for the post of RBI Deputy Governor, to be interviewed on 23 July

Construction of 10 thousand indigenous palms
Initially, 10,000 indigenous clans have been created so far. Other NGOs and entrepreneurs running cottage industries are also being contacted in this capital. In this regard, according to Vigish Issar, the executive of VHP Delhi Province, the VHP’s self-supporting scheme is already running. Under this scheme, initiatives have been taken to boycott Chinese goods and strengthen themselves. Right now work is being done keeping Raksha Bandhan in mind, we will start work for Deepawali from now on.

Also read: Due to Moratorium, the NPA of these 5 private banks will double

Price between 5 and 7 rupees
In the context of the Chinese queues, the price of the roaches prepared by Matri Shakti is being kept at 5 to 7 rupees. Other organizations are also being approached for the construction of Rakhi on a large scale. Online sales are also being arranged. At the same time, shopkeepers and retailers are also being requested not to sell sugar, adopt and sell indigenous rakhi.

Had 10 million face masks
It is worth mentioning that some similar self-supporting scheme was run by VHP during the Corona period, under which VHP had built 10 lakh face masks in Delhi only. The VHP was also provided a fixed amount per mask to those engaged in mask making.

Hearing the rumor of his ill health, Hema Malini shared the video and said – I have nothing