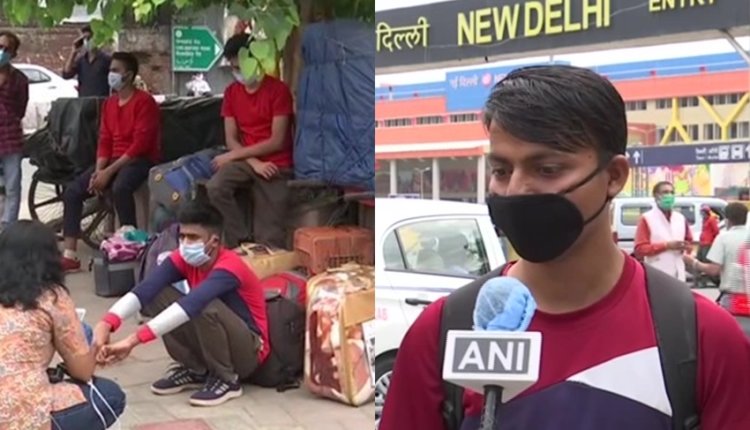 IRCTC Special Trains: Social distancing is being resorted to to prevent the growing outbreak of Corona virus and the country has been locked down. All public transport, buses, airplanes and trains were closed due to this. But after almost two months the government has decided to run the train and today some passenger trains are leaving from New Delhi. Due to no vehicles coming from the house to the station, passengers reached the station long before the time to catch these trains. Some passengers live far away from the station, so they left for the station at midnight on foot.

According to news agency ANI, a passenger going to Patna was evacuated to the station from his home at 2 pm. Talking to ANI, the man said, “I left for the station on foot at 2 o’clock in the night and reached here today. I will reach Patna tomorrow. ”Let us tell you that the special train going from New Delhi to Patna will leave at 5 pm on Tuesday.

Also, according to a report in Navbharat Times, a woman in Mumbai reached the station 8 hours before the train started running. This woman was wearing a PPE kit. The woman said that her daughter lives in New Delhi and she is pregnant. He had to leave early due to his delivery. She was interested in not missing the train for any reason, so she did not leave early and reached Mumbai Central Station at 10 o’clock. The train going from Mumbai to Delhi will also leave at 5 pm.

Program of movement of trains issued by railway

Let us know that most of the trains will run from New Delhi and will have AC coaches. These 15 trains will go from New Delhi to Dibrugarh, Agartala, Howrah, Patna, Bilaspur, Ranchi, Bhubaneswar, Secunderabad, Bangalore, Chennai, Thiruvananthapuram, Madgaon, Mumbai Central, Ahmedabad and Jammu Tawi. These will also include a return trip. These trains will have only AC coaches and its fare will be same as Rajdhani trains. A train will leave from Rajendra Nagar terminal of Patna, capital of Bihar, to New Delhi at 7.20 pm. At the same time, four lakh people have reached homes by 366 workers special trains. 287 trains have arrived while 79 trains are on the way.

Coronavirus /COVID-19 And Lockdown Click on these links to know more news related to: Why is the tax on alcohol important for the states? Know, what is its economics and who earned from UP to Tamil Nadu. 500 crore daily income from liquor, Kejriwal government imposed 70 percent ‘special corona fee’. After the lockdown, the guidelines prepared for the journey in metro and buses, know what rules have to be followed. In India, the number of corona patients is beyond 40 thousand, if you want to avoid the virus, then tie these 5 things. Ayurveda recourse in battle with Corona, approval for trial of Ayurvedic medicine.

Rashmi Desai told that mother did not even have to give 350 rupees to dance class.