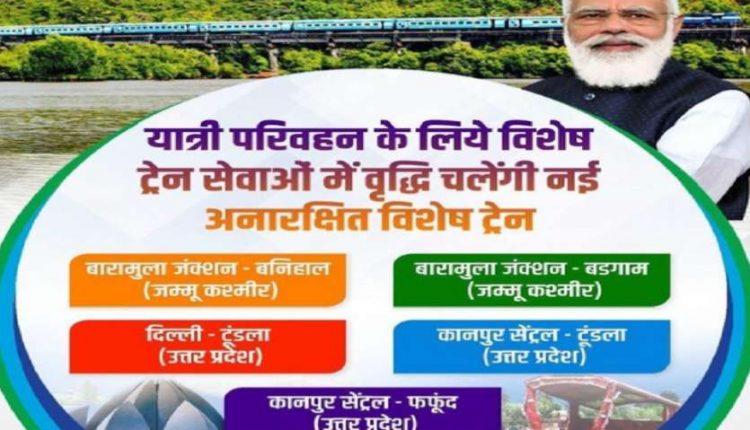 new Delhi. There have been major changes in the country during the Corona period, many changes have been made for the passengers by the Indian Railways as well. For the safe and easy journey of Indian railway passengers, several special trains were run which made the journey easier. Indian Railways has introduced unreserved special trains on several routes in order to increase facilities. If you talk about the unreserved trains running on the new route, then especially from Delhi to Tundla in Uttar Pradesh, Kanpur Central to Tundla, Kanpur Central to Phaphund and from Jammu and Kashmir to Baramulla to Banihal and from Baramulla Junction to Budgam The facilities have been expanded.

The Railway Ministry has shared information about the expansion of these passenger facilities on its Twitter handle. If the railways are to be believed, it is preparing to start more number of unreserved train services in a systematic manner. Apart from this, there is good news for such travelers who were not yet traveling in unreserved bogies, they can now travel by booking their unreserved tickets through the mobile app. In fact, to eliminate the congestion at railway counters, UTS is going to revive the mobile app facility. Through UTS, the traveler can book his general ticket sitting at home.

Not only this, the Railways is also preparing to introduce this mobile app facility in the non-suburban areas of the zonal railways in future.

What is the benefit of UTS?

Let me tell you, all the railway counters were closed at the time of lockdown, in such a situation, the journey on the general ticket was stopped but now the railway is starting it in a systematic way. But keeping in mind the rescue from Corona, Railways is going to restart the UTS mobile app. Due to this, those traveling on general tickets will not have to stand in the queue. And passengers will be able to travel by making their tickets from their mobiles through this app.

PM KISAN: Good news for farmers, eighth installment in account is coming soon, check your name like this