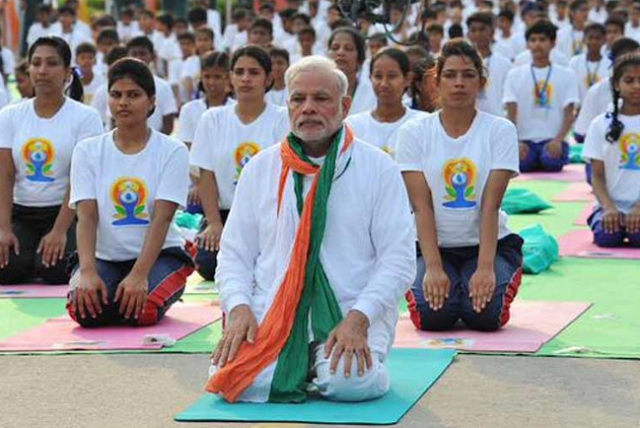 The first International Yoga Day at Rajpath in New Delhi, India has made a new world record. About 35 thousand people practised yoga on International Yoga Day. Ministry of Ayush was given the responsibility for organising the Yoga at the Rajpath Road, Delhi. Delhi Chief Minister Arvind Kejriwal including Narendra Modi and several major leaders attended the event.

Although no official announcement has not been recorded. The Guinness Book of World Records officials were also present and monitored the program. At the end of the day, it will be announced whether it’s a record or not. Earlier on 19 November 2005, 29 973 people came together for Yoga in Gwalior, which is a world record and has been registered in the “Guinness Book of World Records.” The event was organised by Vivekananda Kendra.

On the First International Yoga Day, PM, Modi with greetings to the people of the country and the world. Said, Yoga is for balancing the body and mind as well as for brings the love, peace, unity and harmony in the sense of life.

PM, Modi said, most people consider yoga as the massage medium. I believe that this is the biggest mistake. If yoga is a massage program, then children working in circuses can be called yogi. Only to turn over the body or the making it flexible is not Yoga. The Prime Minister expressed hope that the country will show their support to Yoga environment and it will continue in the future. PM, Narendra Modi also thanked 177 countries for showing their support to this event and Yoga.