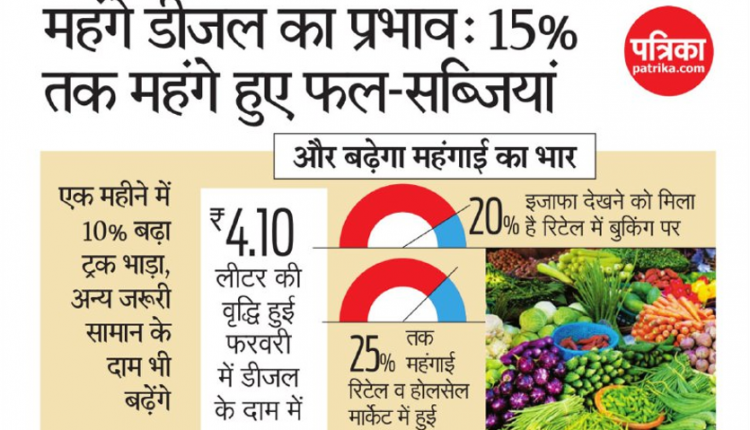 New Delhi . The increase in diesel prices in February has impacted the freight on truck haulage. According to the Indian Foundation of Transport Research and Training, there has been an increase of about 10 per cent in truck fares in February. This has had an impact on the prices of all commodities. The prices of fruits and vegetables have seen an increase of 10 to 15 percent. During February, the price of diesel has increased by about Rs 4.10 per liter. Due to this, the transporters have increased the fare. It has also had an impact on bookings made in retail with long distance vehicles. It has seen an increase of up to 20 per cent.

Effect of up to 25% in the market
Higher inflation than diesel has come in retail and wholesale market. Truck fares have gone up by 10 per cent, while it has had an impact of up to 25 per cent in the market. This is the reason, so far there is no opposition from the traders on the increase in diesel price. This has impacted the public’s pockets.

Milk, egg and chicken will also be expensive-
Milk, egg and chicken prices are also expected to rise in the next few months. Businessmen associated with these businesses say that the business of the poultry firm has been badly affected by the corona epidemic, lockdown and bird flu. This has affected supplies from chicken to eggs. Now hotels, restaurants and banquet halls are slowly opening up. A third of milk, eggs and chicken demand comes from hotels and restaurants. In such a situation, demand is now set to increase, but supply is unlikely to increase in that proportion.