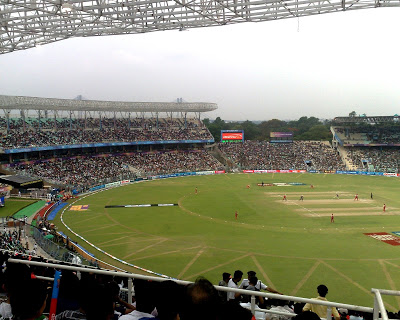 BCCI announced, next year from March 11 to April 3rd, ICC Twenty20 Cricket World Cup will be held in eight cities of India and the final will be played at Kolkata’s Eden Gardens. The tournament will be played in these cities Bangalore, Chennai, Dharmasala, Mohali, Mumbai, Nagpur, New Delhi and Kolkata.

According to sources Mumbai’s Wankhede Stadium in the race to host one of the two semi-finals, while Feroz Shah Kotla in Delhi may be called upon to host the second semi-final. BCCI secretary Anurag Thakur said that one semi-final would be played in Mumbai. The second will be in Delhi. Dharamsala will host the qualifier match against India.

Four years ago, during the 50-over World Cup in India in Kolkata, many the big game was not played. The match between India and England was moved at Bangalore’s Chinnaswamy Stadium because the ICC had found that the repair work is not complete Eden, Kolkata. Earlier at the Eden Gardens in 1987 and 1996 the World Cup semifinals and reliance Cup final were played.

BCCI said the chosen venues must meet the criteria. The board stated in a statement, only after meeting the criteria of ICC and BCCI match will be held in these locations. T20 World Cup is going to be the first time in India. India won the first Twenty20 World Cup in 2007.

Thakur said about the tournament that we are proud of this prestigious tournament. With this announcement, we have been preparing. Twenty20 World Cup we want to make it memorable for the participants and spectators. The board has also set the tournament management committee, and Dalmia and Shamnayak Thakur will head it.