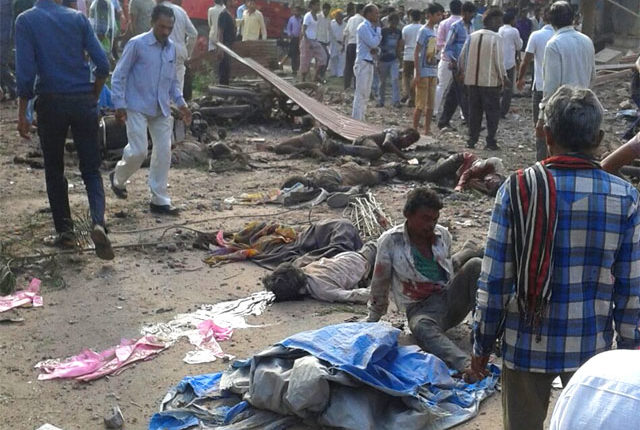 Over 100 people injured and 104 people were found dead after a massive explosion occurred in the Petlawad town of Jhabua district in Madhya Pradesh on Saturday morning. The exact reason behind the explosion is uncertain. However, it is believed that the LPG cylinder in the restaurant exploded leading to a second major blast caused by gelatine sticks stored in the nearby house.

As confirmed by ML Gond, the inspector in-charge of Jhabua’s police control room, to AFP over the phone, he said, “There are 104 confirmed deaths at the moment. Eighty-two postmortems have been carried out, and 22 are still pending.” The blast, which occurred at 8:30 am, was full of office goers and school children having breakfast. The restaurant was reportedly located in a three-storey building. The blast which crippled the entire building with three other houses left the whole location in ashes. Many people were trapped in the debris and were later pulled out by rescuers.

The injured people were immediately taken to hospital in Dahod, Ratlam and Jhabua. Prime Minister Narendra Modi expressed grief over the incident. He tweeted, “Extremely pained at the loss of lives due to the cylinder blast in Jhabua. My deepest condolences to the families of the deceased. Wish all those injured a speedy recovery. MP Government is monitoring the situation closely.”

Expressing sorrow over the unfortunate happening, Madhya Pradesh chief minister Shivraj Singh Chouhan announced a compensation of Rs 200,000 for the families of the dead and Rs 50,000 for the injured people. Besides, he also shared on the micro-blogging site, “The Jhabua tragedy is heart-wrenching. I offer my condolences to the families of the victims and pray for the speedy recovery of those injured.” Also, the MP Chief Minister also ordered a probe into the incident.