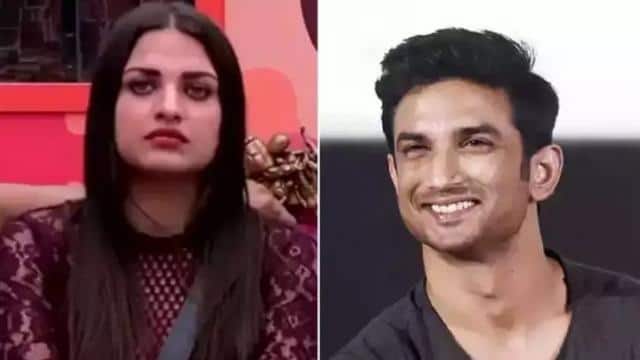 The death of Bollywood actor Sushant Singh Rajput has shocked the entire Bollywood industry. The actor gave his life by hanging himself in the house on 14 June. Friends and family are still not convinced that the actor has said goodbye to us. Recently, ‘Bigg Boss 13’ Contestant Himanshi Khurana has given a statement on the death of Sushant Singh Rajput. Himanshi says that Sushant’s aura was different, allowing people to connect themselves. We were all too sad to leave Sushant because somewhere it seemed that we all know Sushant personally. Then even if we have never met them.

Himanshi further says that when I woke up in the morning of 14 June, the manager told about Sushant. I was shocked. I started thinking about them. I was thinking about what would have happened had they taken this step. Sushant’s death had a profound impact on my health. Suddenly my blood pressure had fallen. People started thinking that Sushant had all the names, work and money, yet why did he do this. Many times you cannot buy your happiness with these things. Despite everything, you are lost yourself. They are unable to tell or explain to others what is bothering you. I do not know what was troubling Sushant. He did not share his feeling with anyone.

Shekhar Suman reacts to this statement of ‘Gang is running in Bollywood’, Kangana Ranaut

Himanshi says that people suddenly started talking about mental health and depression. I feel bad that these things started being talked about only after this accident. Why did it not happen before this? After Sushant’s death, people are coming forward and talking about this. Sharing his own troubles. We lost an actor to talk about these things, I am sad to think about this. People are talking about social media trolling and depression, where were these people before. Earlier, when talking about depression, people used to think that it is mentally ill. Is doing for publicity. People fight through many troubles. Despite everything, they feel some deficiency or lack of happiness. I am sorry for Sushant leaving.

Talking about Himanshi Khurana’s personal life, she is currently dating Asim Riaz. Both have been together since the time of Bigg Boss.