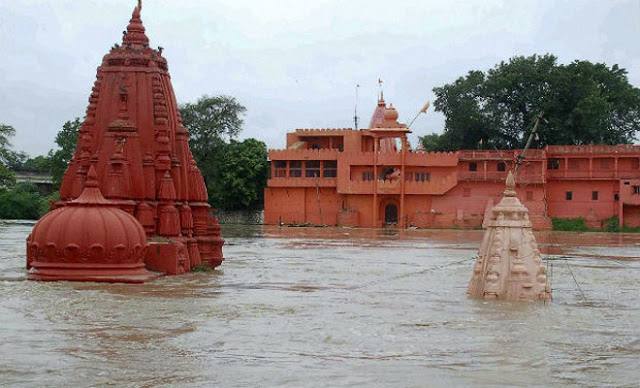 Excessive downpour in the last two days has disrupted lives of the people in western Madhya Pradesh. Though the rains showed a sign of relief from the extreme heat, water-logging brought the city’s traffic to a halt. The temples near the Shipra River in Ujjain are also submerged in water. With no sign of discontinuing, the rain has led to chaos as almost 20 colonies have been flooded. As the railway tracks were sunken, the trains were either delayed or cancelled considering the water-logging situation.

The bedlam caused by untimely rains has also led to shutting down of schools in Ujjain and Indore. Many people were shifted to relief camps set up nearby on Sunday. Due to incessant rains, the amount of rainfall in the western area of Madhya Pradesh has surged by 7 per cent. Earlier, the area had 11 per cent deficit in rains. Lack of an efficient weather system was the cause behind scanty rainfall. The humidity level in these areas has also escalated due to moist winds coming from the Arabian Sea.

In 36 hours, Ujjain has recorded 319mm rainfall which is believed to have broken the record of rain in a span of 24 hours. Moreover, Bhopal, which has broken the last 10-year record of rains in 24 hours, recorded 149 mm rainfall while Indore witnessed 129 mm. Scared due to heavy rains, the officials along with priests organised a special prayer near shipra River to please the rain god.

The reason behind the monsoons creating mayhem is considered to be low pressure which is near north-west Madhya Pradesh and a few areas of Uttar Pradesh. According to the sources, the heavy downpour is likely to continue for another 24 hours, leading to increasing in a flood situation. The people would get relief after this cyclonic monsoon moves toward Rajasthan.