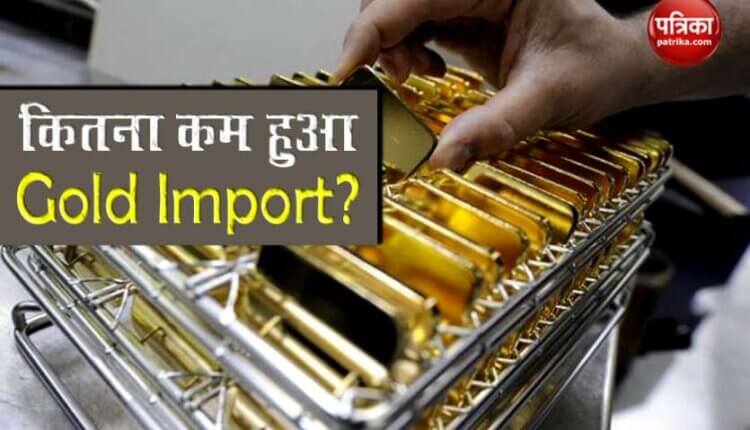 new Delhi. Due to the absence of domestic physical demand due to coronavirus, there has been a huge reduction in gold imports. According to the data, in the first two months of the financial year 2020-21, in April and May, the import of gold decreased (Gold Import Decline) to $ 7.914 million. According to data released by the Ministry of Commerce, the reason for this decline in gold imports was due to the decrease in demand due to the Kovid-19 epidemic. Whereas in the same period of the last financial year, gold imports stood at $ 8.75 billion. Let me tell you that due to reduced gold imports, it helps a lot to reduce the country’s trade deficit.
If you also withdraw more than 20 lakh rupees from a bank account, know what SBI rules say
Reduction in the current trade deficit – In April-May of the current finance, the difference between 2020 imports and exports stood at $ 9.91 billion. – The same difference was $ 30.7 billion in the year-ago period. According to the Reserve Bank of India, India has left the current account surplus equal to $ 0.6 billion or 0.1 per cent of GDP in the January-March quarter due to the reduction in trade deficit. – The country’s current account owes $ 0.6 billion. The current account deficit was recorded at $ 4.6 billion, or 0.7 percent of GDP, in the year-ago period.
PM Modi’s treatment will be in this scheme of PM Modi, know what is the government’s plan
82.46% decline in jewelery exports – Gold imports are registering a steady decline since December 2019. In March 2020, the decline in gold imports was 62.6 percent. – 99.93 percent in April and 98.4 percent in May 2020. 800-900 tonnes of gold are imported annually in the country. – Gems and jewelery exports declined 82.46 percent to $ 1.1 billion in April-May 2020. During the first two months of 2020-21, silver imports also decreased by 30.7 per cent to $ 43.789 million.

If you also withdraw more than 20 lakh rupees from a bank account, know what SBI rules say