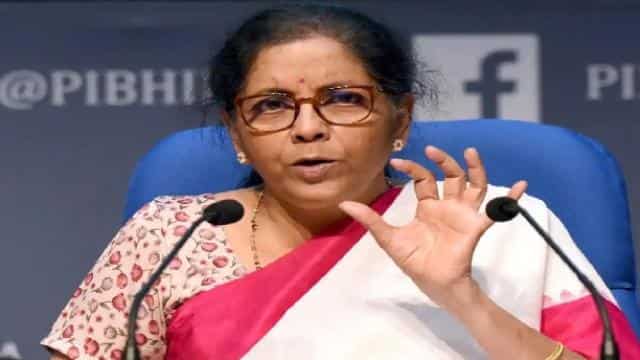 Finance Minister Nirmala Sitharaman said on Saturday that banks have been asked to automatically give loans to good borrowers without fear of ‘3-C named investigating agencies’ CBI, CVC and CAG. He said that in a meeting with the CEOs and Managing Directors of public sector banks and financial institutions on Friday, there have been clear instructions that banks should not be afraid to give loans, because 100 percent guarantee is being given by the government. .

He said this in a conversation with Bharatiya Janata Party (BJP) leader Nalin Kohli. The finance minister’s conversation has been posted on the party’s social media accounts. Sitharaman said, “Yesterday, I reiterated that if a decision goes wrong, and if there is a loss, the government has given a 100 percent guarantee.” It is not going to go against the individual officer and the bank. Therefore, without any fear, they should adopt this automatic route in the sense that additional credit and additional working capital are available to all eligible people.

Also read: Before announcing the package, also studied the announcements of other countries: FM

The government has announced an emergency loan guarantee scheme of Rs 3 lakh crore for the MSME sector as part of the macroeconomic package of Rs 20.97 lakh crore. It is being said that decisions are being affected due to the possibility of undue harassment by the Three Cs ie Central Bureau of Investigation (CBI), Central Vigilance Commission (CVC) and Comptroller and Auditor General (CAG) in the banking sector.

He said that the Finance Ministry has taken several steps to address these fears. These steps include the withdrawal of some notifications that were creating fear among bankers.

Sitharaman said, “… these banks had concerns in the past and many still have this fear. And it also has a solid foundation. In fact, I have told banks at least thrice in the last 7-8 months that they should not have a fear of three-C’s. The economic package should be about the exclusion of many important areas including hospitality, auto and aviation. When asked about the ongoing criticism, Sitharaman said that the government has adopted a holistic approach rather than a sector-based approach.

He said, “Reforms have been made in agriculture and power sectors. Except these I have not named any particular sector. It is now being called MSME package, but it includes MSMEs and efforts to keep other sectors involved as well.” So, the areas you are taking name from (package) will also benefit them.