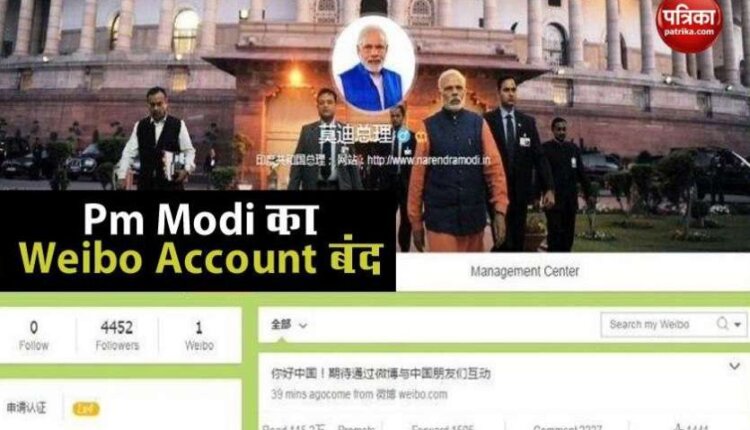 new Delhi. The Chinese government has banned many of China’s social media apps, the gaming app, in the midst of strong relations with China. The world’s largest video sharing app has been blocked. Now the app which has been closed by the Government of India, the account of Prime Minister Narendra Modi himself was for the last five years. Which is closed. All posts have been deleted. Let us also tell you which mobile app was on which Pm Modi account for the last five years.

Also read: A penalty of Rs 1900 crore may be imposed on Twitter, know the reason behind it

Block these two Chinese apps
The central government has completely blocked Baidu Search and Weibo. Both these apps are very famous in China. Baidu search is a Chinese search engine of the Internet, as Baidu is used, Baidu is used. The second is China’s largest social media app Weibo. Launched in China about 11 years ago, this app is very much liked worldwide. It has 500 million users. Many celebrities use it.

Also read: Working women are getting the cheapest home loan here, know how much interest rates are there

PM Modi’s account for five years
Even Prime Minister Narendra Modi of the untouched country was no more with a Weibo account. When he visited China in the year 2015, he downloaded this app on his mobile. To increase the love and trust between the two countries, he had downloaded it and posted his post ‘Hello China! Looking forward to interacting with Chinese friends through Weibo. ‘ In these five years, there were close to two lakh followers in this account of PM Modi. Let us tell you that Weibo’s social media app is like Twitter.

Also read: How to get a new PAN card lost, what is online process?

PM’s goodbye to Weibo
Recently, 20 Indian soldiers were killed in the violence by China in the Galwal Valley. After that, relations between the two countries had become quite bitter. After which PM Narendra Modi said goodbye to Weibo. According to media reports, the government has issued instructions to remove both these apps from both the Google Play Store and Apple Store.

12 months is earned from dairy, government will also help to start business