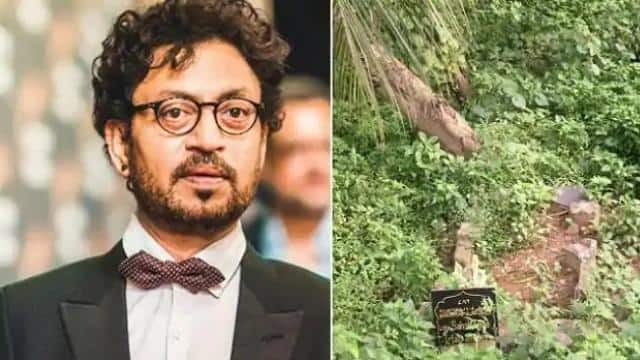 Irfan Khan left this world on 29 April. Recently, actor Chandan Roy reached Irfan Khan’s grave. He shared a photo of Irfan’s tomb on social media. Fans of the actor were very sad to see the condition of Irrfan’s grave in the photos. They want Irfan’s grave to be kept to a minimum.

So someone said that he was very special, someone should take care of his grave. Fans are tweeting a lot on social media. Talking about this, Chandan told E-Times, ‘People have become emotional after seeing photos, but I did not do all that for social media. His grave was not adorned, but he had a vibration in it. There was some magic power in it.

Can you pls ask Some one pls visit and do some sajawat for him. Seeing him unnoticed its hurting 💔🤲. Ya rab sukoon atah farma🕯🤲 Ameen

Even a common man’s grave have boundaries and well maintained …
Its heart breakinh to see his grave jst like a normal 1 …. He was not only a person but a gem .. A true human being … Pls sum1 jst take cre of his grave may he rest in peacefully

Can you pls ask Some one pls visit and do some sajawat for him. Seeing him unnoticed its hurting 💔🤲. Ya rab sukoon atah farma🕯🤲 Ameen

No other celebrity’s death in history has shaken and effected me as much as Irrfan Khan’s death. Feel like a personal loss, a close friend has died. Still today. 4

Is involved there someone to tend to the grave.?

He was Sahebzade… He is Sahebzade and will always remain Sahebzade!
.
Sahebzade does not die… does not say goodbye to memories!

Chandan shared photos of the tomb and wrote, ‘I was missing Irfan since yesterday. Unhappy with himself that he did not go to see his grave for four months. Today I went, he was resting there alone. There was no one around, there were only plants and there was silence. I left Rajnigandha there for them.

Sunil Gavaskar said about Virat-Anushka, Zarine Khan said- what you said does not suit you at all

Actress Tia Bajpai got her drug test done, shared the report and gave this advice to other actors

After the departure of Irrfan Khan, his wife Sutapa always shares her experiences on social media about the actor. A few days ago Sutapa told during an interview that Irrfan was not romantic, but he used to keep making special experiences to Sutapa in his own way. Sutapa had said, ‘Irfan Husband was not a material. I sometimes ask them to do some normal things like celebrating a birthday, but to no avail ‘.

Sutapa had told how he was when he was married to Irrfan after many years of relationship. Sutapa said that she could never find any fault in him because he could not remember even his own birthday. However, with a small effort from Irfan, Sutapa got a special feel.

Sutapa further said, ‘Irrfan used to sing Bengali songs for me because he knew that I loved Bengali songs very much. Irrfan cannot be defined as a husband, father and star according to social definitions because he surprised you by crossing every definition. He was very special to me and always will be.

Apple’s new initiative! Bringing 3 layer special face masks to protect you from Corona, know the characteristics of this mask