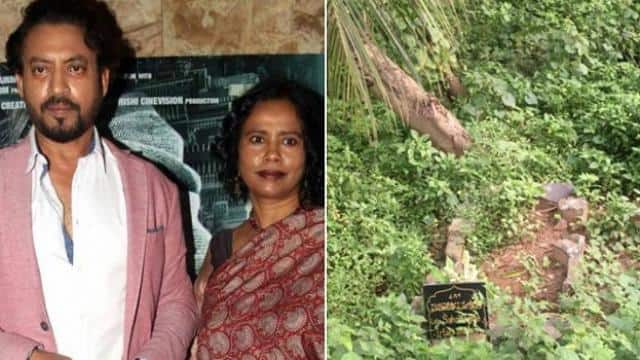 Irfan Khan left this world on 29 April. Recently, actor Chandan Roy reached Irfan Khan’s grave. He shared a photo of Irfan’s tomb on social media. Fans of the actor were very sad to see the condition of Irrfan’s grave in the photos. They want Irfan’s grave to be kept to a minimum. Now when a user asked Irrfan’s wife about the grave of the actor, they responded very sweetly.

A user commented on Sutapa, Dear Sutapa I recently saw a photo of Irfan Bhai’s tomb. I feel very sad because it has been only a few months and his grave has become like this. I thought you had planted the queen of the night because Irfan loved that plant. What happened? If that photo is real then it is a shame. If you have a recent photo of Irfan’s tomb, post it.

Sutapa responded to the user and said that the women are not allowed to go to the Muslim cemetery, otherwise they would have planted the queen’s night plant.

Sutapa further wrote about the tomb, because of rain, grass and plants have grown near the tomb. It is wild and beautiful as I saw in the photo you are talking about. After all, why should everything be according to the definition and do you know that the steps that have risen near the grave have some purpose. look carefully.

Please tell that Chandan shared photos of the tomb and wrote, ‘I was missing Irfan since yesterday. Unhappy with himself that he did not go to see his grave for four months. Today I went, he was resting there alone. There was no one around, there were only plants and there was silence. I left Rajnigandha there for them.

Was missing irrfan since yesterday, beating himself for not having gone to his tomb for 4 months. Today i went, there he was resting alone with no-one around with plants. In silence. I left him some Rajnigandha and took a piece of him back with his blessings. So long #IrrfanKhan pic.twitter.com/3xzoAS7zzZ

Sutapa said – he was not a husband material

After the departure of Irrfan Khan, his wife Sutapa always shares her experiences on social media about the actor. A few days ago Sutapa revealed during an interview that Irrfan was not a romantic, but he used to keep making special appearances to Sutapa in his own way. Sutapa had said, ‘Irfan Husband was not a material. I sometimes ask them to do some normal things like celebrating a birthday, but to no avail ‘.

Sutapa had told how he was when he was married to Irrfan after many years of relationship. Sutapa said that she could never find any fault in him as he could not remember even his own birthday. However, with a small effort from Irfan, Sutapa got a special feel.

Sutapa further said, ‘Irfan used to sing Bengali songs for me because he knew that I loved Bengali songs very much. Irrfan cannot be defined as a husband, father and star according to social definitions because he surprised you by crossing every definition. He was very special to me and always will be.

Alia Bhatt praises Ranbir Kapoor in this style on his birthday, sharing a photo and saying ‘Dil’