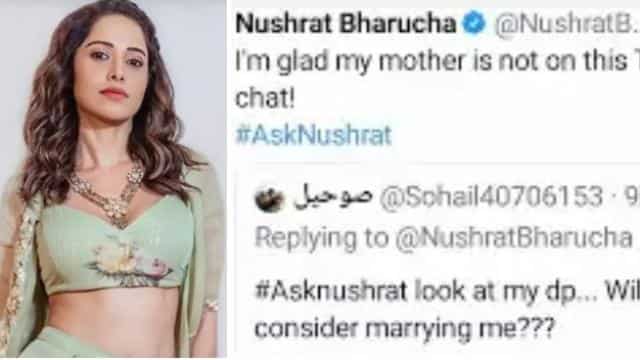 Actress Nusrat Bharucha recently celebrated her birthday with her parents and grandmother. She could not have a birthday party due to the Corona lockdown, but did enjoy some people. Apart from this, ‘Dream Girl’ put a question-and-answer round on Twitter for the fans. Many celebs on social media congratulated the actress on her birthday. Fans also did not lag behind.

Taking advantage of the #AskNushrat session, a fan asked Nusrat to marry. Fan wrote, look at my photo, will you marry me? In response, the actress wrote, ‘I am happy that my mother is not on this Twitter chat.’ After this, a fan asked her what is the thing that you want to get in your life? The actress said that the person with whom I want to spend my whole life. With whom I want to take the family forward and whom I can call myself.

Talking about the workfront, she was seen in Ayushman Khurana’s ‘Dream Girl’. The film was a box office hit. It had earned 142 crores. This was Nusrat Bharucha’s second hit film which was successful at the box office. Nusrat is now going to be seen in Rajkummar Rao’s film Chalang. At the same time, she will also appear in Vicky Kaushal’s brother Sunny Kaushal with ‘Huddang’.